“Drilling has gone well”, says Clive Sinclair-Poulton of Beowulf Mining. “We started drilling in May and put a second rig in place in June.”. The subject of Beowulf’s attentions is the Kallak North iron ore project in Norrbotten County, northern Sweden.

So far the company has been able to identify a resource of 131.6 million tonnes of ore grading 28% iron. But there should be plenty more to come. 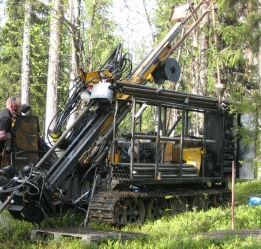 Already the signs from the ongoing drilling are beginning to come in, and they’ve been highly encouraging. “Our JORC resource was based on drilling to 250 metres”, says Clive, “but the latest intersections show 350 vertical metres of iron ore.”

The full assay results won’t be out until next month, but, local conditions allowing, progress after that ought to be pretty rapid. “We’ll do a JORC upgrade at Kallak as soon as possible”, says Clive. At the same time, the company also plans to start work again on the contiguous ground at Kallak South, where a previous drilling produced mixed results because, says Clive, “we weren’t drilling in the correct areas”.

This time round, he’s hopeful the drilling will be more effectual, and that a maiden JORC resource for Kallak South can be put together early next year. “I want to be in a situation where we have tonnage on both North and South Kallak”, says Clive. By that time a scoping study should be underway, and the company will be thinking about test production.

Precisely what that will show remains to be seen, but Clive is optimistic. “If we get the tonnage we have a 60 year life. It’s 40 clicks to get to the rail network of northern Sweden.” The rail network can then provide access either to Narvik on the Norwegian coast or Luleå on the Baltic coast, depending on what sort of deal Beowulg eventually strikes in regard to the final destination for the ore.

Clive has long been in dialogue with potential customers in the Far East, although he won’t be drawn into a deal quite yet. He’s waiting for two things. One, for more progress on Kallak. And two, for further improvement in the iron ore market, which he remains firmly bullish about.

In fact, iron ore hasn’t been doing too badly of late, as the Chinese are beginning to realise that some projects that had been likely to add to global supply are now not likely to come on stream. The Brazilian champion Vale is a case in point. Vale recently outlined its iron ore plans for the next five years, and these show a significantly lower production increase than had been expected. What’s more, says Clive, fairly soon India will become an importer. It’s currently the third largest exporter.

It all makes for relative strength in the iron ore space, at a time when other sectors are looking distinctly shaky, including equities markets. Beowulf has not been immune to this, as its shares have dropped by around 80 per cent since they hit a 12 month high of 50p back in October last year. But although the wider negative market sentiment hasn’t’ helped, the company has also face some quite specific issues which have rubbed off the value.

First off it was sanctioned by the authorities for drilling without a permit. Clive is blunt about this. “Mea culpa”, he says. “As Dan Maskell would have said, it was an ‘unforced error’.” Procedures are now in place to ensure such a mistake doesn’t happen again. More significant has been the deterioration of relations with the local indigenous group, the Saami community The Saami are worried about their ability to drive reindeer across the land, and the impact Beowulf’s operations are likely to have on their migratory patterns.

“Dialogue is very difficult”, says Clive, “although in all of Sweden there are only 20,000 Saami.” The Beowulf plan is to set up a fund for the benefit of all residents of the Jokkmokk region in which it operates, not just the Saami. In the meantime Clive is confident that the Mines Inspectorate will broker a compromise when disagreements arise, as it has done in the past.

In the meantime, the drill rigs continue to turn, and funding, at least for the moment, is not a worry. “We are in a strong position”, says Clive. “We have the funds in place to do the drilling. On our current drilling campaign the money won’t run out.” It’ll be interesting to see what sort of the results the campaign comes up with, and how much closer they take Beowulf to its eventual target of 500 million tonnes.