The year 2016 started on a very bearish note but ended very bullishly. It was a dramatic oil year with desperation and pain for oil producers as Brent bottomed out at $27.1/b in January before trading to a high of $57.89/b in December. The mood was on the positive side in H2-16 as Brent crude averaged $49/b which helped to lift the US oil rig count by 209 rigs to 525. OPEC then ignited further bullishness by deciding to cut production which helped to propel speculative WTI positions to a new record high of 502646 contracts net long (502 million barrels) at the end of 2016. The year 2016 was definitely the year when the global oil market moved from a large, running surplus to close to balance as the strong growth in oil inventories seen all through 2014 and 2015 came to a halt.

We expect 2017 to be much less dramatic than 2016 unless the supply side is hit by major unforeseen outages. The variations between despair and euphoria should be much less extreme and thus so should the variations in oil prices. While 2016 started bearishly and ended bullishly we expect 2017 to be the opposite but not as extreme. Oil inventories are likely to draw down in H1-17 as OPEC cuts production and crude oil curves are likely to move from deep contango in 2016 to instead backwardation in 2017. While falling in 2016 US shale oil production is going to rise in 2017.

OPEC has now started to reduce output according to its decision on November 30th to curb output from 34.2 mb/d in November to a planned production of 32.5 mb/d in H2-17. Libya’s crude oil production is however increasing and stood at 685 kb/d this weekend versus an average production of 360 kb/d in 2016. Thus cutting overall OPEC production according to plan is not all without problems. However, Saudi Arabia’s determination as well as its willingness to cut even more than its pledge lends confidence that cuts to overall production will be successful nonetheless. In the face of a further strong rise in US oil rigs during H1-17 we think it will be difficult for OPEC to agree to role forward their production cuts into H2-17. In our view OPEC’s main objective for cutting production in H1-17 is to draw down current elevated global oil inventories thus shifting crude oil prices from a spot discount of $12/b in 2016 to instead a crude oil spot premium of $5/b versus longer dated contracts. We think they will be successful in achieving this with no need to role cuts into H2-17.

The crude oil market is heading into 2017 on a very bullish note with net long non-commercial WTI positions (i.e. speculative positions) at a record high. The 1mth Brent crude oil price closed the year at $56.82/b which was the highest close since July 2015. US oil producers activated 51 oil rigs in December which was the highest monthly addition since March 2014. With record net long speculative WTI positions and US shale oil rigs on a strongly rising path there is clearly a risk for price set backs ahead even though we have an overall positive view for oil prices in H1-17. 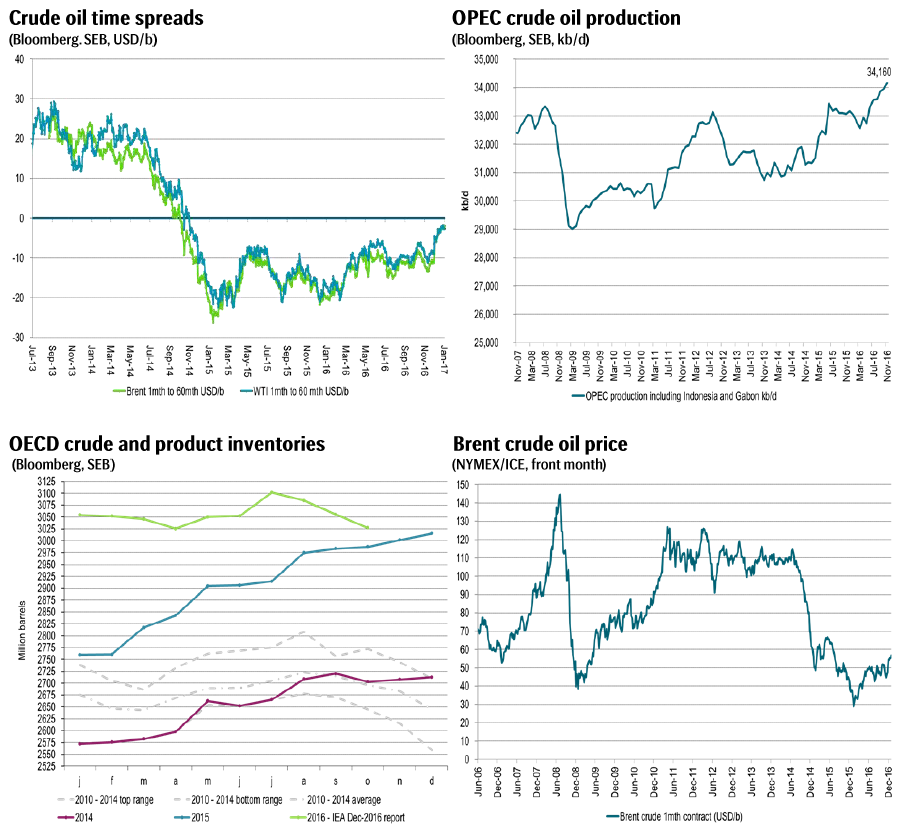 OPEC meeting May 25th – Give me a premium!