My key takeaways (Sales Summary)
Oil prices have been volatile lately due to the hurricanes in the U.S Gulf coast, with Brent testing the important support of $53/bbl yesterday, and confirmed it. The Brent front end curve is now again in backwardation. OPEC+ is standing firm on its cuts and they seem open to extending them beyond Q1-18. Oil inventories are declining and the number of US Shale Oil rigs have been declining for four weeks in a row and we believe this trend will continue. US crude production have fallen 700kbbl/d due to hurricane Harvey, which would result in a 5 mbbl outage if it lasts for a week. These factors together with low overall net long speculative positions makes us believe that there is great chance that oil prices will increase during H2. However, spikes should be good opportunities for producers to hedge as we believe there will be plenty of oil in 2018.

Price action – Testing support at $53/b – it held
Brent crude traded with some intraday noise yesterday fluctuating between gains and losses before settling up 0.1% on the day at $53.84/b. Intraday it traded down to $53.04/b which seems to have been a pure technical move to test the technical support at $53/b which it recently broke above. Following the price noise from the hurricanes in the U.S. Gulf the Brent crude oil curve is again back in backwardation at the front end of the curve. The WTI curve is however still left in solid contango as the bottlenecks created by Harvey are still problematic. The WTI to Brent November spread has moved out to $5.2/b. The WTI October contract closed up 1.2% ydy as some of the bottlenecks have started to clear but still closed as low as $48.07/b

Crude oil comment – Waiting for the next bullish catalyst – but do sell the rally when/if it comes
Brent crude is back in backwardation at the front of the curve. OPEC+ is standing firm on its cuts. It’s delivering on them and also seems open for extensions beyond 1Q18. Oil inventories are declining and front end crude prices and oil product curve structures are firming.

The number of US shale oil rigs declined by 5 rigs again last week to 605 rigs. It has now fallen four weeks in a row which is the first time since May 2016. We think this trend of declining US shale oil rigs is likely to continue towards the end of the year as there are too many rigs with completions struggling to catch up to drilling.

We do not think that this matters too much fundamentally with respect to the oil market balance in 2018 because there is such a large inventory of drilled but uncompleted wells to complete from. For the autumn however we think that seeing the number of drilling rigs declining when the WTI 1-2 year forward prices holds above $50/b could add a positive, bullish sentiment to the oil price: “See, WTI crude is above $50/b and rigs are declining! Shale oil players need a higher price to be profitable!” And maybe they do need a higher price in order to do what they do. That is at least the verdict of equity market which has punished the shale oil sector so far this year in lack of show of profits.

At the moment we also see that that US crude oil production has fallen back some 700 kb/d due to hurricane Harvey. If the outage lasts for a week it will shave 5 million barrels from global oil inventories. However, it will revive and rise strongly towards the end of the year in our view. Thus later in 4Q17 it could take away some of the current optimism of a firming oil market.

Hedge funds as of Tuesday last week had a fairly low overall net long position. I.e. there is quite a bit of room to the upside in terms of closing down shorts and adding length to their speculative positions.

North Korea has been in the news lately. What would happen to oil if a nuclear event developed is hard to say. For now we have sanctions of oil exports to North Korea on the table. This would of course reduce oil demand and so could be interpreted as potentially bearish. However, the magnitude of their consumption probably does not amount to more than some 20 kb/d. That is no more than the current weekly growth in US crude oil production (baring the recent set-back due to hurricane Harvey).

In the shorter term we have a constructive price situation. OPEC+ is firm on cuts, US shale oil rigs are declining, global oil inventories are declining, US crude production is currently down 700 kb/d, oil production in Libya has recently seen set-backs (though back up again now), hedge funds net speculative positions were at a low level last Tuesday. Technically the Brent crude price has broken up above the important $53/b level. It was tested as support yesterday and it held. Now Brent is set to test the $55.33/b level before the year to date high of $58.37/b (January 3rd) could be challenged.

However, we think there will be plenty of oil in 2018 with the need for OPEC+ to hold cuts through all of next year. Thus a bounce in crude oil prices near term should be utilized as an opportunity to hedged 2018 for the natural sellers, the producers. A new round of hard hitting hurricanes approaching the U.S. Gulf thus creating supply disruption risks could be the catalyst for such a bounce. A new and slightly longer set-back in Libya’s crude oil production could be another one. Producers and natural sellers should stay ready to utilize such a bounce.

Ch1: Brent crude front end curve back in backwardation
We have not had a lasting backwardation like this since 2014 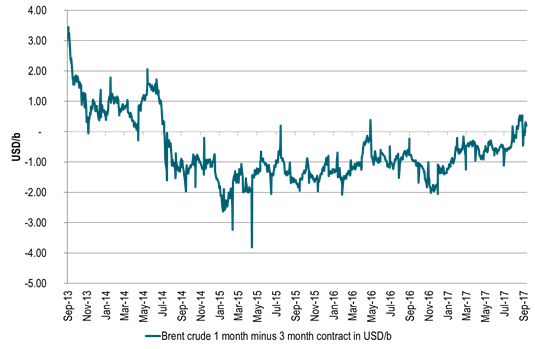 Ch2: The WTI crude curve is still in contango however. Clogged with bottlenecks from hurricane Harvey 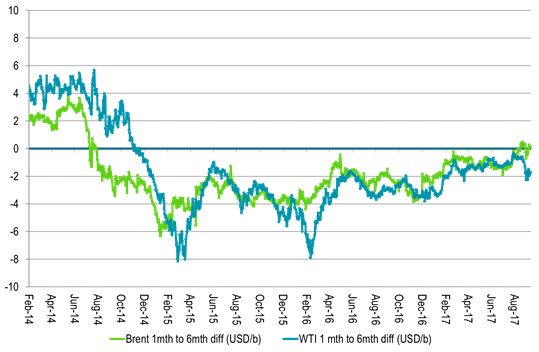 Ch4: Crude oil forward curves now and one week ago 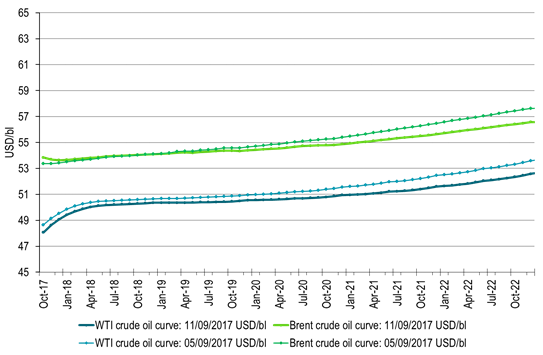 Ch5: Hedge funds net long spec at low level as of Tuesday last week
Room to add length which would give bullish impetus to oil prices 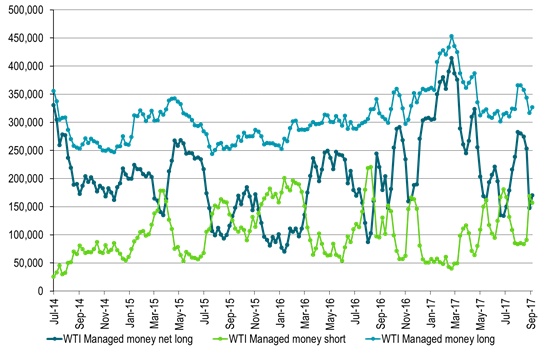 Ch6: The spike in product cracks created by hurricane Harvey have fallen back 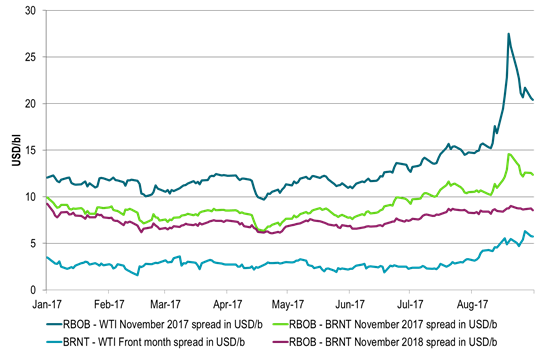 Ch7: OPEC is delivering on its pledge cuts 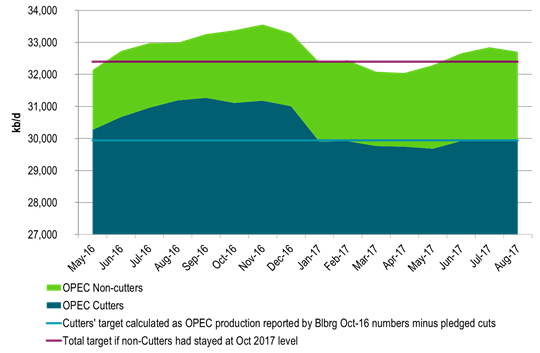 Ch8: US implied shale oil rigs have fallen back 4 weeks in a row – first since May 2016 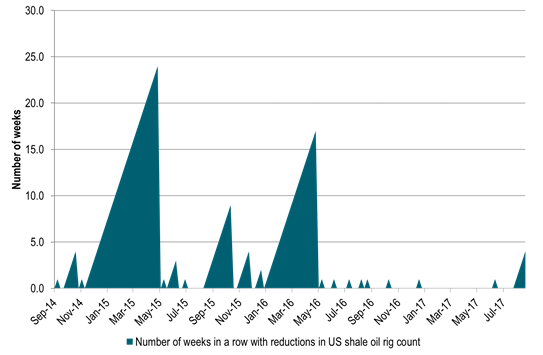 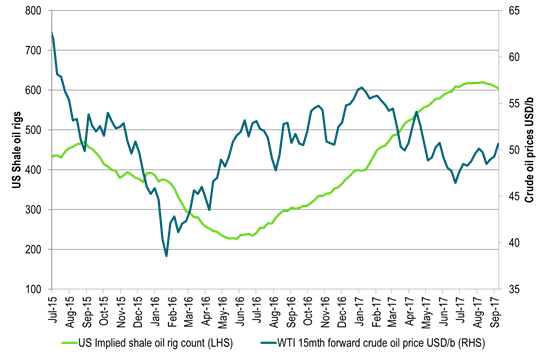 Ch10: US crude oil production disrupted some 700 kb/d by hurricane Harvey
Shaving some 5 mb off global inventories if it lasts for a week 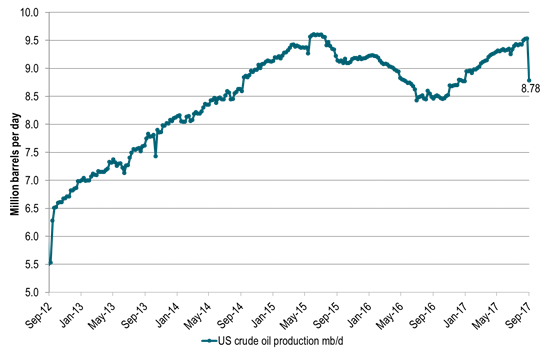 The Permian pipes are coming and it is no small potato