Brent crude oil is trading up 0.2% this morning to $71.5/bl supported by Kuwait’s statement that OPEC will discuss extending production cuts to 2019 at its June meeting in Vienna. Extending cuts to 2019 is not about driving inventories yet lower and the oil price yet higher. It is about avoiding inventories from rising back up again. OPEC+ has cut production, drawn down OECD inventories to just 24 million barrels above the rolling five year average in February with target in sight in May. Thus victory as such, but the group cannot place its deliberate cuts back into the market neither this year nor in 2019. The group is to a larger or lesser degree stuck with its cuts for the time being and in 2019. We estimate that deliberate cuts amounted to 2 m bl/d in February versus seasonally adjusted OECD inventory draw down of 0.2 m bl/d through Jan and Feb this year. This does not mean that US shale has OPEC+ up against the wall quite yet. Saudi Arabia for one still has plenty of ammunition left if needed. The group just cannot yet place its cuts back into the market. The main vulnerability is the OPEC+ cooperation. If that fell apart we would see rising inventories and falling oil prices. The rising tension in Syria is bullish if it leads to sanctions towards Russian oil exports but it would be bearish if it sows the seeds of division within the OPEC+ group. For now and in 2019 our view is that OPEC+ is in control of the oil market and it is not out of bullets even though it cannot exit cuts.

Brent crude oil is trading slightly lower morning at $71.3/bl after having been supported by Kuwait’s statement that OPEC will discuss extending production cuts to 2019 at its June meeting in Vienna. It is clear that the production cuts by OPEC+ has been successful in terms of drawing down global oil inventories and lifting prices in consequence. On average OECD inventories drew down about 0.75 m bl/d during the last 7 months of 2017 while they have only been drawing down 0.2 m bl/d through Jan and Feb this year. Both adjusted for seasonal trends. OPEC+ has delivered hard on its pledged cuts but with significant internal variations with respect to deliberate cuts, involuntary cuts and production increases. In comparison to the OECD drawdowns mentioned above the average deliberate cuts from Jan-2017 to Feb-2018 was 1.77 m bl/d and in February the deliberate cuts were 2.1 m bl/d (not counting individual gains and involuntary cuts). What is clear is that deliberate production cuts have been much larger than the draw downs in OECD inventories. So if it had not been for the cuts by OPEC+ then the global oil market would clearly still be subdued with a significant running surplus through 2017 and very, very high inventories today.

What OPEC+ would like would of course be to cut production, draw down inventories and then put production cuts back into the market. OECD commercial inventories in February only stood 24 million barrels above the 2013 to 2017 five year average. So victory as such.

However, OPEC+ is not in a position to place its deliberate production cuts back into the market. The group is for the time being more or less stuck with its cuts. It cannot get out. At least not yet and this is why the group needs to discuss extending production cuts to 2019 at its Vienna meeting in June 20/21/22. If it wants to avoid inventories from rising back up again in 2019 it will need to maintain cuts.

But OPEC does not have its back up against the wall yet. It still has more bullets left. Just look at Saudi Arabia. Yes, it has cut production by 0.7 m bl/d versus its October 2016 production of 10.6 m bl/d. But that means that it is still producing 9.9 m bl/d at the moment. In comparison its average production from 2005 to 2016 was 9.3 m bl/d with a low of 7.86 m bl/d at the start of the crisis year 2009. In other words it can easily deepen cuts if needed even though it is not obvious if it would do so alone without cooperating cuts by the rest of OPEC+. Thus vulnerability is along the lines of further OPEC+ cooperation and cohesion.

As long as the internal cooperation within OPEC and the wider OPEC+ is not falling apart the group still has the capacity and ability to hold the oil market, to hold the oil price both this year and next year. Total OPEC+ production in Feb-2018 stood at 49.5 m bl/d plus NGL thus accounting for more than 50% of global supply. OPEC+ is not home free to place its cuts back into the market again neither now or in 2019. Extending cuts to 2019 is not about driving inventories yet lower and the oil price yet higher. It is about avoiding inventories from rising back up again. If Venezuela declines more than expected or if US sanctions are revived towards Iran it may allow some return of deliberate cuts. 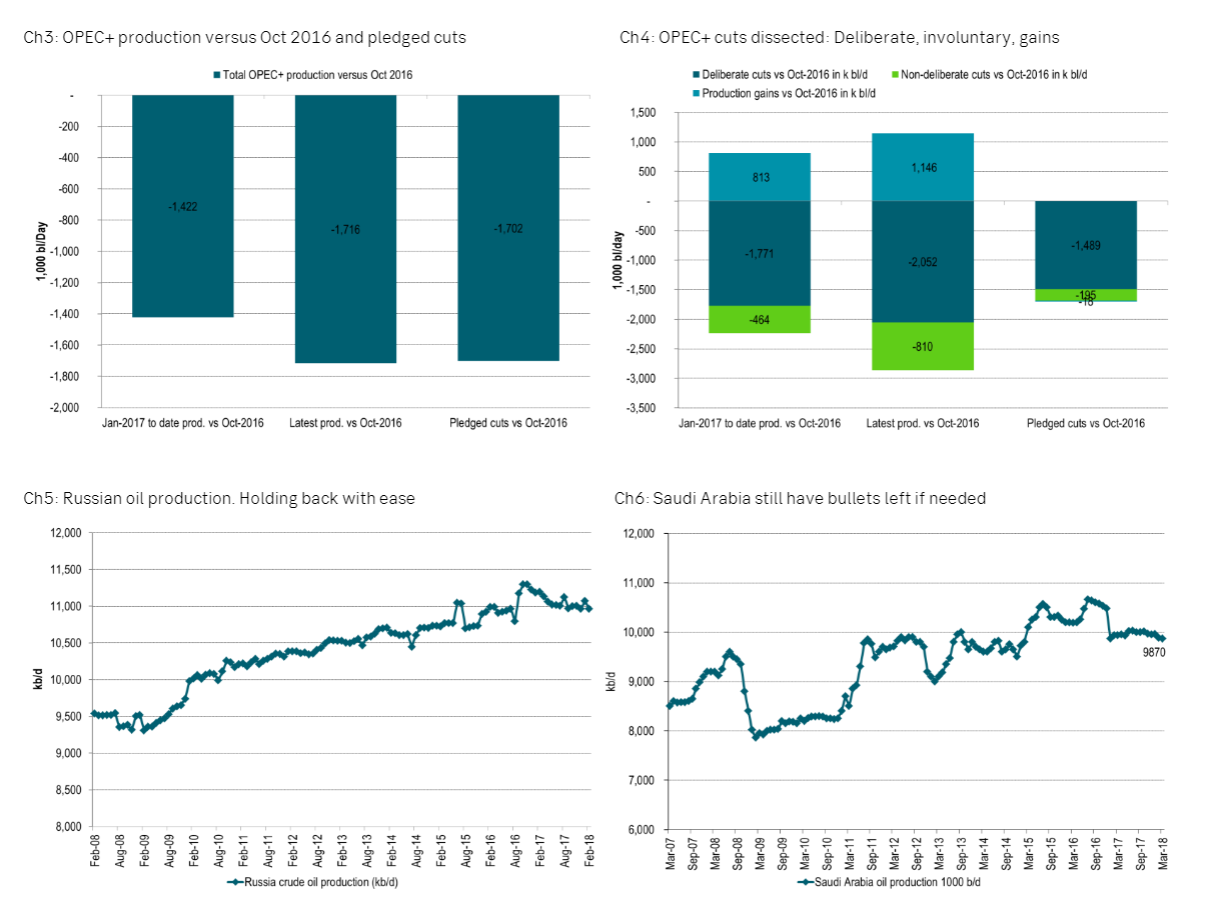 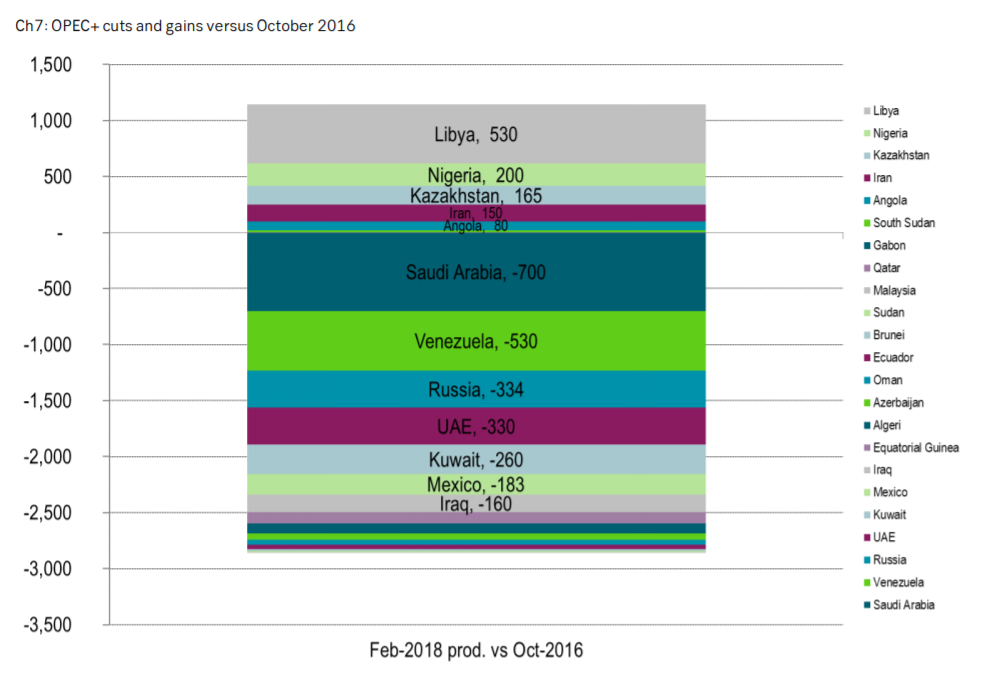 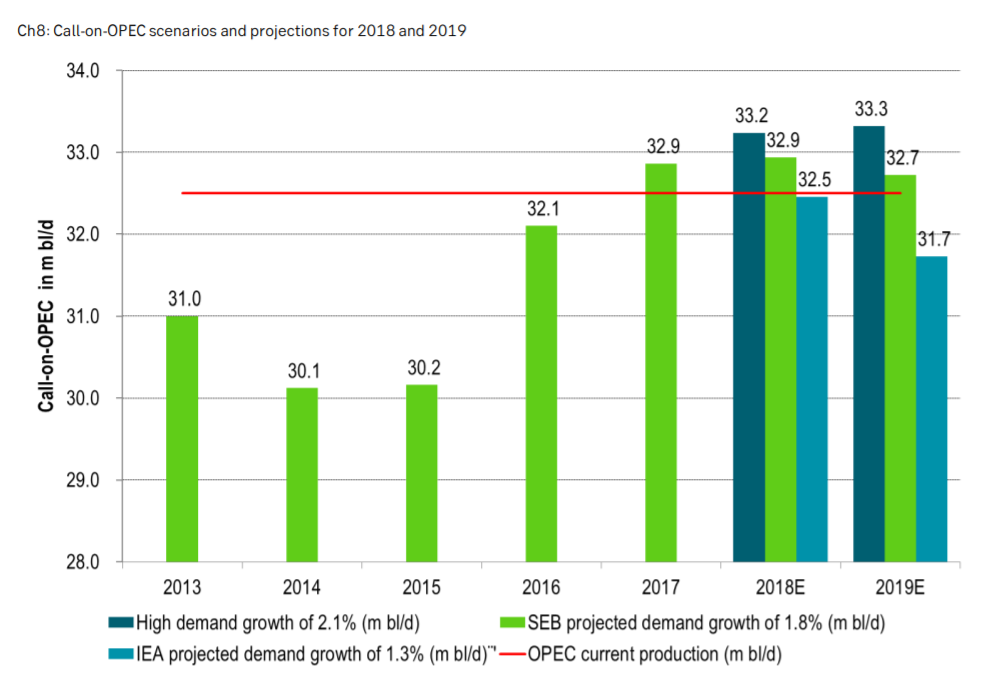