In hindsight the market was obviously not satisfied with OPEC just rolling their cuts over for another 9 months. The market’ judgement was clearly that that was far from enough. So if OPEC & Co’s production cuts were judged to be insufficient to balance the market then the price itself will have to do the job or a part of the job as well. If so, then the question is at what level do the oil price need to move to in order to shift US shale oil rig count from expansion to neutral or contraction.

The US shale oil space has now been in one loooong expansion phase continuously for one year. First in terms of rig additions). So our current empirical knowledge is actually one year old from when we experienced that US shale oil rig count started to expand when the US WTI 18 mth contract crossed above $46-47/b however with a 6 weeks lag. Has this inflection point shifted higher or lower over the last year? The market doesn’t really know and now it needs to know. Shale oil productivity and technology improvements and further spreading of “best practice” from the leading companies to the less advanced has probably shifted it lower. Cost inflation is however clearly evident and is working in the other direction. Fracking and completion of wells seems to be a bottleneck at the moment. This should make companies more caution in terms of adding more drilling rigs. No point in more rigs and more wells if you cannot complete them and move them into production.

The one and a half year forward WTI crude oil price (18thm contract) yesterday briefly traded down to $47.2/b before closing the day at $47.89/b. Thus right down to the empirical “shale oil floor” before bouncing up again. The 30 day average (6 weeks) for this contract is today $49.5/b. Thus we are at least starting to get close to the empirical inflection point from last year. We should thus soon see much softer growth in the US shale oil rig count and then it eventually should crawl to a halt if the WTI 18 mth contract continues to trade at current level of $47.5/b. Unless of course the inflection point has shifted yet lower today than where it was last year. This is clearly possible and it is also clearly what the market needs to know.

The US EIA this week released its monthly energy report. Its prognosis was that there was no deficit on the horizon for the global oil market within their outlook to 2018. Actually they project that the OECD stocks inches slightly higher y/y to end 2017 and then again a little higher y/y to end 2018. That was depressing for the bulls and it again strengthened the post OPEC view that what OPEC has decided to do is not going to be enough. The EIA actually agrees with this view.

Then on Wednesday, just one day after the EIA’s monthly report, data was released showing a big jump in oil inventories with crude stocks up 3.3 mb, gasoline up 3.3 mb and distillates up 4.4 mb with total for the three up 11 mb. That was kind of a nail in the coffin for the oil bulls and the oil price sold off sharply.

The whole debacle around Qatar has not been good for the oil price either with concerns that increasing disagreement between the OPEC countries could possibly undermine the current agreement for production cuts. Historically however OPEC has managed to sail through major political differences while still maintaining production cuts or strategies.

We do agree that it would be a good thing to get a refresh of where the current US shale oil rig inflection point is today as it is a full year since last time. However, we do disagree with the current view that OPEC & Co’s cuts won’t do the trick in 2017. We still strongly believe (baring Nigeria and Libya revival) that OECD’s commercial inventories will draw down strongly through H2-17 and stand close to normal by the end of the year in strong contrast to the latest monthly report from the US EIA. The inventories in weekly data have drawn down strongly since mid-March. Yes, this week they went up by some 10 mb for US, EU, Sing and floating combined, but last week it went down by 20 mb. In total they have drawn down 70 mb since mid-March and more is to come as we head into H2-17 with strong revival in global refining activity. We thus expect that the current view that there will be no draws in OECD stocks in 2017 displayed by the EIA this week will evaporate in not too long. We also think that OPEC’s production cuts will not fall apart due to the current debacle surrounding Qatar.

As such we don’t expect the current depression in oil prices to last through to the end of the year. We may have to hold out for a little while in order to figure out where the current US shale oil rig count inflection point is – where “the US shale oil price floor” currently is, but continued solid inventory draws should soon convince the market again that the market is surly running a deficit.

Today at 19.00 CET we have the Baker Hughes US rig count. Highly interesting to see whether the last six weeks with an average WTI 18 mth price of $49.5/b has started to slow down the US shale oil rig count growth. 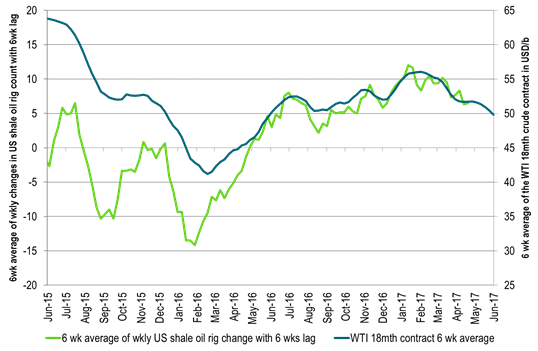 Ch2: US inventories did counter the downward trend this week. But that should be noise
We still expect inventories to draw down across the board the coming half year 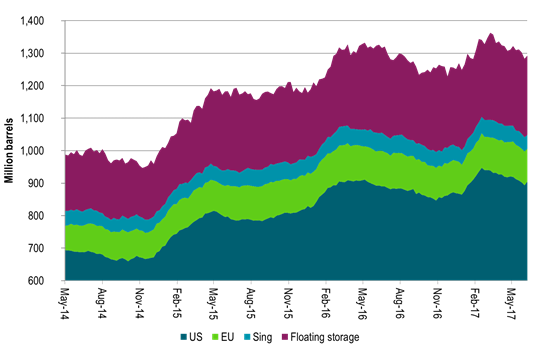 Rising oil inventories – In the US