Iran’s oil minister Zanganeh yesterday intervened verbally in the oil market by stating that OPEC’s members do not want Brent crude oil above $60/bl because of shale oil. The market could not care less and instead jumped 1.5% to $68.82/bl totally forgetting and disregarding that the current deficit and inventory draw down is artificially mastered by OPEC & Co. Later in the day the US EIA revised its US crude oil production 2018 forecast up by 250 k bl/d to 10.27 m bl/d. Still too low in our view. Later today we’ll have the US oil inventories for which the API yesterday predicted a huge crude oil draw of 11.2 m bl. Brent crude is trading bullishly at $69.2/bl (+0.6%) and ready to take the jump above the 2015 high of $69.63/b and potentially touch $70/bl. US crude oil production is growing and growing to the increasing concern of OPEC & Co and their verbal intervention has started. Producers should listen carefully and take good care of their downside risks.

Zanganeh’s statement should not be taken lightly by the market. The market seems to forget that a key reason for why we have had an 18% y/y (to 29 Dec 2017) bull-rally in the oil market was because OPEC & Co held back a significant amount of supply and still are. It has thus been an artificially mastered bull-market by the hands of OPEC & Co. The draw-down of global inventories has of course been real but it has been a mastered draw-down at the will of OPEC & Co and it still is.

If OPEC & Co deems the oil price too high and the US crude oil production growth too strong then they can and will do something about it. Yesterday we saw the first step of verbal intervention. Expect more of the same to come. And if the market refuses to listen then they will put more supply into the market.

The market is just happy that oil prices are rising. Global economic growth is accelerating, oil demand growth is very strong, inventories are drawing down and oil prices are naturally rising as a result. The oil market does of course have good reason to be positive about the current strong oil demand growth. It has definitely taken the oil market out of the woods so to speak with the Brent 1mth contract now trading at a premium of $9.6/bl over the three year contract. A part of that is strong global oil demand growth. A large part is however OPEC & Co.

The US EIA yesterday revised US crude oil production for 2018 up by 250 k bl/d to 10.27 m bl/d. That was the fourth revision higher in four months. We still think it is too low with more revisions higher to come and we think that everyone are probably able to see this with just a half eye open.

In December 2017 the US EIA estimated that US shale oil production would likely growth by 94 k bl/d from Dec-17 to Jan-18 thus exiting 2017 at a solid 1.1 m bl/d marginal annualized pace. Last year’s shale oil activity was much about drilling with fracking and completion substantially trailing the drilling activity leading to a huge build-up in DUCs (uncompleted wells). For the year to come we’ll likely see a shift towards completions of these wells and less focus on the drilling of new oil wells. As such we will likely see that completions of wells actually increase some 20% y/y to 2018 while drilling activity falls back by 20%. All in all we are likely to see more well completions in 2018 than in 2017 and not less. 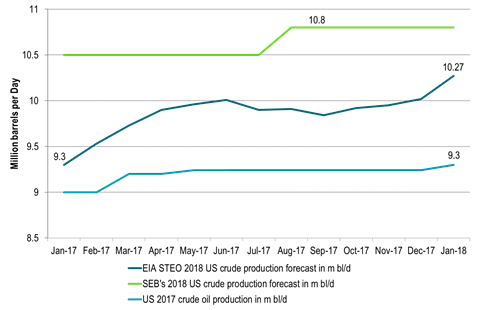 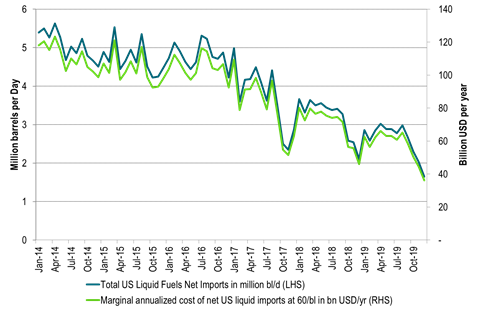 Ending the year at a very strong marginal growth rate of 1.6 m b/d. Then very soft in 2018 in the face of higher prices, bullish market sentiment and increasing well completions. Why this soft outlook? 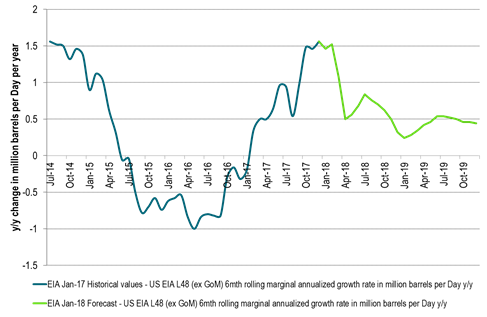