Brent crude yesterday rebounded 1.8% to an intraday high of $73.92/bl as the Turkish concerns eased a bit and the lira strengthened and OPEC reported that Saudi Arabia produced 10.288 k bl/d which was down 200 k bl/d m/m in July. The crude gain didn’t last out the day however as global growth concerns continued with a continued strengthening in the USD Index (+0.4%) and a further sell-off in industrial metals where copper sold off 1.8% just short of the $6000/ton line. Brent ended the day at $72.46/bl (-0.2%). It is down 1% this morning at $71.8/bl along with copper which has broken below the $6000/ton line and is down 2.2% this morning and down 19% since its peak in early June. Rising US crude stocks and EM debt concerns in focus.

The copper alarm bells have been ringing since early June when it peaked out at $7332/ton. Since then it has been downhill. Copper has been labelled as the only metal with a Ph.D. in economics due to its “canary in the coal mine” ability to sense turning points in the global economy. This morning copper broke down below the $6000/ton line losing 1.7% only this morning.

Global growth has been sliding since January this year. Through this ongoing slide the thinking has been that this is transitory with accelerating global growth kicking in again in 2H18. That is definitely still possible. The thinking now however is increasingly that what we are seeing now in Turkey is only the first symptoms of the broad based ongoing financial tightening and exit of easy money by the world’s central banks. Bloomberg predicts that net asset purchases by the three main global central banks will decline from $100 billion a month in 2017 to zero by the end of the year.

This tightening will typically hit countries with substantial external dollar liabilities which they have accumulated during the easy money era. The Institute for International Finance estimates that debt in 30 emerging markets has increased from 143% in 2008 to 211% today (Bloomberg). Now the dollar is rallying and liquidity is tightening and dollar interest rates are rising. In addition Donald Trump tops up global growth concerns with escalating trade war talk/action and sanctions.

The USD Index continues higher and the US Fed continues its rate hike cycle and the world’s three main central banks continues to rein in easy liquidity and it all seems to come down on the shoulders of emerging market growth again hitting both sentiment and demand growth for both copper and oil.

There are many reasons to be bullish both crude and copper down the road but right here and now the arrows seem to point lower. Today we’ll have US manufacturing and retail sales data. If they continue on the strong side then the dollar gain and EM debt-pain probably has further to go with continued bearish pressure on crude and copper. We also have the weekly US oil inventory data due at 16.30 today which are expected to show a 2.5 m bl crude build with US API seeing it even higher at 3.7 m bl w/w.

The longer dated Brent crude rolling 36 mth contract has held out well against the sell-off in the front end Brent contract. It still trades at $66/bl and more or less bang in the middle of where it has traded since early May. However, if the EM debt-pain continues to escalate along with dollar gains and US rate hikes then also the longer dated contracts are likely to cave in at some point along with the bearish pressure at the front end of the crude curve.

Counter to the copper market the oil market has OPEC to shore up the market in case of a surplus. But such action may not be immediate and historically there is definitely a very visible relationship between fluctuations in global growth, copper prices and crude oil prices. The current EM weakness and front end crude curve weakness has the clear potential to create a buying opportunity out on the curve if it at some point sells off along with the front. Consumers should definitely utilize such a sell-off if it materializes with lots of bullish factors down the road. 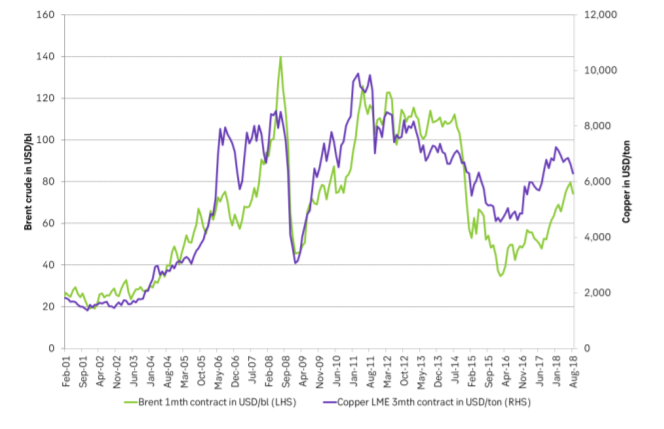 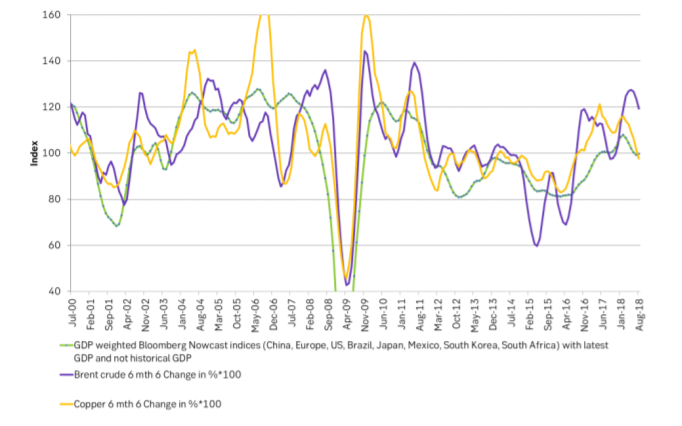 Ch3: The rolling 36 mth Brent contract is holding out well against the front end sell-off 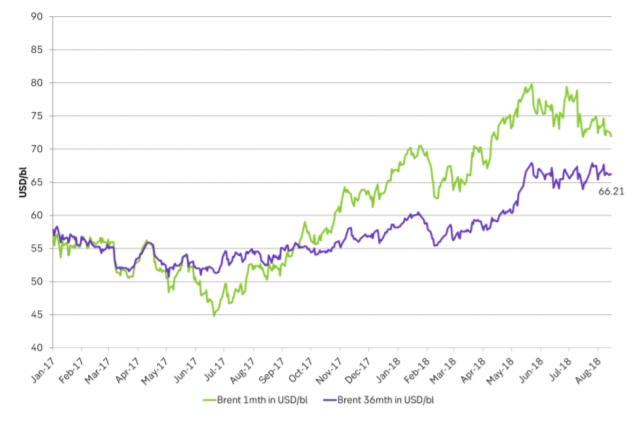