Following some intraday swings with Brent trading as low as $54.82/bl it closed the day with only a slight loss of 0.3% at $55.48/bl. The whole forward curve lost slightly more with Brent Dec-2020 loosing 0.6% with a close of $55.53/b. During the day there were clearly some concerns that the bull-rally we have had since early September and which has handed us the highest Brent price since April should topple over. It did however hold with Brent closing above the earlier resistance at $55.33/bl. This morning Brent is trading steady at $55.5/bl. It takes little note of the Caribbean hurricane Maria since it is not projected to enter the US Gulf. Iraq and some other producers are calling out for an additional 1% output cut but that does not give any resonance in higher prices either. We don’t really see the point in cutting more as the current cuts currently are highly effective with declining inventories and most crude and product curves already having moved into backwardation at the front end of the forward curves.

The US EIA yesterday released its monthly drilling productivity report and DUCs report. Of interest was the fact that the number of drilled wells came in at the highest level since March 2015 reaching 1267 wells drilled. Today’s wells are however twice as productive. Thus real drilling is actually way higher than in March 2015. Drilling continued to run ahead of completions also in August just as has been the trend all since December last year. Both drilling and completions rose but the gap widened and led to an increase in DUCs (Drilled but uncompleted wells) of 231 with total number of DUCs reaching 7048 wells. That was the largest monthly increas in DUCs since January this year. Marginal, annualized production growth was projected to fall back slightly to a rate of 960 k bl/d/yr in October from 1,151 k bl/d/yr in Sepember.

We maintain the view that there is more upside near term in crude oil prices with the same arguments we have pitched lately: Net long specs are fairly low, inventories are falling, OPEC in general and Saudi specifically are firm on cuts and do deliver, curves have shifted into backwardation (enticing more long specs to enter into positive roll-yield), US oil rig count is declining (adds bullish sentiment) and technicals points to a revisit of earlier highs of the year.

If you spice it up with a continued softening in the USD and potentially another hurricane heading for the US Gulf, then higher prices are on your plate.

Short term price gains the nearest months should however not be taken at face value in terms of indications for what one should expect in 2018 where we still see the need for OPEC intervention all through 2018. Thus oil producers looking to hedge their production for 2018 should bide their time for the likely upside near term.

Ch1: US shale oil production continues to rise, but losses in existing production is rising as well 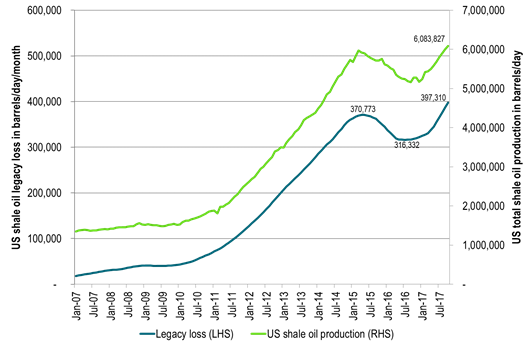 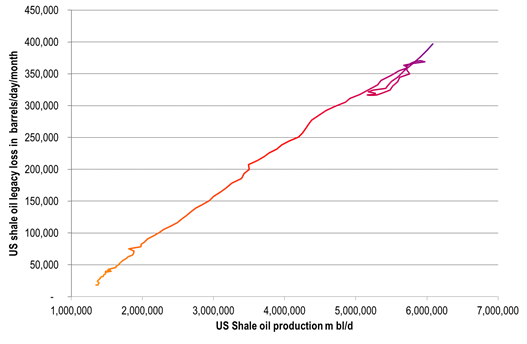 Ch3: Marginal, annualized shale oil production growth to fall back slightly in October to just below 1 m bl/d
Producers do however have a lot to gain from speeding up completions as they have A LOT of DUCs to take from 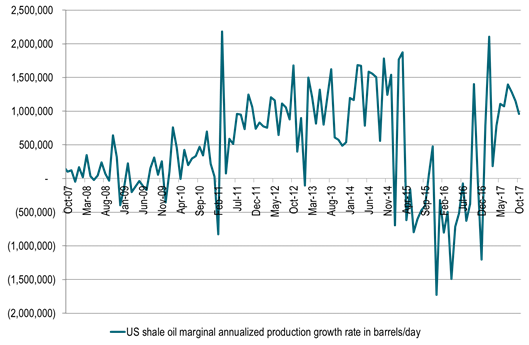 Ch4: Drilling continues to run ahead of completions. Both rose in August but gap widened to 231 and highest gap since Jan this year
As a consequence the DUC inventory continues to rise and rise
In perspective we have that the 1510 DUC which has been added to the DUC inventory since December last year implicitly contains some 500 m bl of producible oil within a three year time horizon.
In addition comes the other 5538 DUCs (out of the total 7048) being of unknown quality and quantity
In reference the OECD inventories were down 85 m bl YoY in July 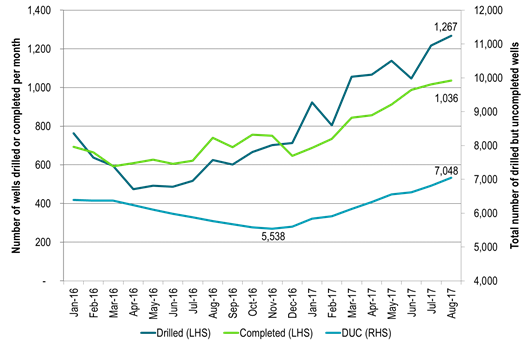 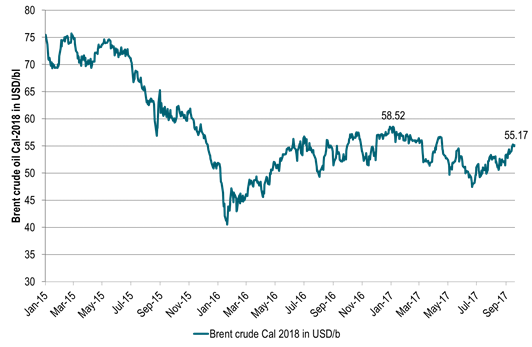