Last Monday Brent crude broke above the 30 dma line for the first time since June 24. As such it was a significant break with the two months long downtrend. Yesterday it broke down below that line again which roughly stood just above $49/b. The latest huge gyration in the oil price has been mostly about financial flows and short covering and less about fundamentals. The fact that we broke and closed down below the 30 dma again yesterday gives a sinking feeling that the latest financially driven bounce, was just that, financially driven. Thus having blown off some of the short positioning in the market we may be back to more fundamentally driven prices. The short positioning is however still huge and short covering could come into play again. For now however we are down into bearish territory. This morning Brent crude is rebounding 1.2% to $48.2/b after yesterday’s 4% sell-off with a close of $47.63/b. Equities rising some 1.5% in Europe and 3% in Shanghai helps to lift the oil price this morning where also industrial metals are higher. 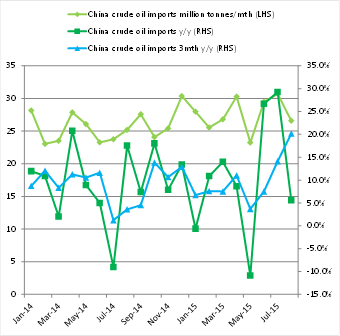 Meeting hedge funds in London last week a question posed was: $35/b or $70/b

We met with hedge funds in London last week. Where are we heading in terms of oil prices longer term was of course a key question. While the future will be different from the past, they still posed the question whether we are now going to move back to the historical inflation adjusted average oil price of $35/b. The question posed was thus: will we move to $35/b or $70/b rather than asking if we are heading to $70/b or to $100/b over the next 5 years. BP’s inflation adjusted oil prices back to 1861 has an average of $34/b in 2014 dollars. Since 1974 the average is however $58.3/b. SEB’s current view is that we are going to revert back to $70/b during the next 5 years in a response to the huge, ongoing cap-ex cuts in the oil industry. The current market price for Brent crude December 2019 is $62.7/b and just $2.6/b above the recent low of $60.07/b from August 24. Substantial producer hedging in deferred oil contracts has been quoted as a key driver for the decline in oil prices in July. If oil producers are required by their owners or lenders to hedge more as the pain in the oil sector intensifies, there could be more downward pressure in long dated contracts. At the moment the longer dated price (5 year) is pretty close to the real price average of $58/b since 1974. 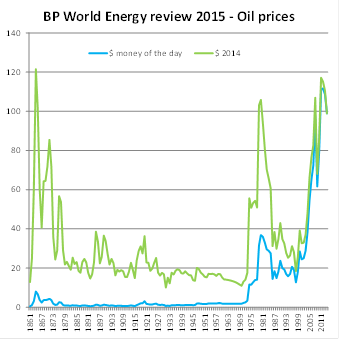