Brent crude has gained 21% since Christmas eve following a comparable 12.4% recovery in the S&P 500 index. So just as the sell-off in Brent crude went more or less hand in hand with the equity sell-off this autumn the Brent crude recovery has gone hand in hand with the recovery of the S&P 500 so far this year. There is of course a fundamental story for the oil rebound as well with cuts by OPEC+, US shale oil rig count decline and declining production in Venezuela and Iran (and others). But what the equity-oil relationship through the autumn up to now is telling us is that if the current equity rebound falters with a renewed sell-off in the S&P 500 then the Brent crude oil price is likely to falter as well.

Donald Trump’s call for a regime shift in Venezuela with his outright support for opposition politician Juan Guaidó has led to a gain in the value of government bonds in Venezuela and thus seen as a positive development by bond investors on a general basis. Impacts on Venezuela’s oil production in the short to medium term is however another matter. To us it looks like more chaos and further decline in crude production.

A ban on oil imports from Venezuela to the US would likely only hurt US refineries which needs the heavy oil from Venezuela to blend with ultralight shale oil. Venezuela’s crude would probably just travel to other parts of the world instead of to the US. So an import ban to the US would probably not tighten the oil market as such. Tighter sanctions towards the Venezuelan economy with the goal of toppling the current Maduro regime would however most likely lead to a further rapid deterioration in Venezuela’s oil production which of course is directly bullish for the oil market. Eventually moving to the other side of chaos with an eventual Juan Guaidó regime holding hands with the US would then of course turn things around again as it would lay the foundation for a revival in crude production in Venezuela again but that seems to be way down the road from here.

As far as we understand it is not at all impossible for the US refineries to process ultralight US shale oil as it is today without blending it with heavy crude from Mexico or Venezuela. It is more that it is not optimal. Many of the US refineries were built for medium sour crude from the Middle East. In such complex refineries there are a lot of expensive post processing units following the division of the oil molecules in the atmospheric and vacuum distillation stage. All these post processing units have specific volume capacities calibrated to the molecule distribution in medium sour crude. So if US refineries process outright ultralight US shale oil in the distillation stage then many of the post processing units will run at sub-par volumes. Even the distillation stage may not be able to run at optimal capacity. I.e. it is technically and economically sub-optimal for these refineries to run shale oil outright but not necessarily difficult. It is mostly about economics. So a lower shale oil crude price versus product prices should facilitate this. The gasoline crack to Brent crude has however crashed to below zero and made it much more difficult. Or said in another way: A yet lower shale oil crude price is needed.

US crude and product inventories have sky-rocketed adding close to 90 m bl since late July last year of which 60 m bl have been added since late December. At the moment the market does not care too much about this since OPEC+ is cutting and production in Iran is falling (with further falls in Venezuela to be expected) while US well completions and rig count has started to decline. So the remedy for the booming inventories is on the way. If however the US S&P 500 recovery sours before the remedy shows signs of working (declining inventories) then crude oil prices would most likely follow the S&P 500 index lower.

A price-path dependent oil market. In our crude oil projection for 2019 we have projected Brent crude to average $55/bl in Q1-19 and we are well above that level now. It is important to note the strong price path dependence of today’s crude oil market. If we get a higher oil price now we’ll have more drilling more well completions and a higher oil production in the following quarters. It may feel good with Brent at $61/bl right now for global oil producers, but it may not be so good for the oil market in H2-19 as it will lead to a higher US crude oil production then. 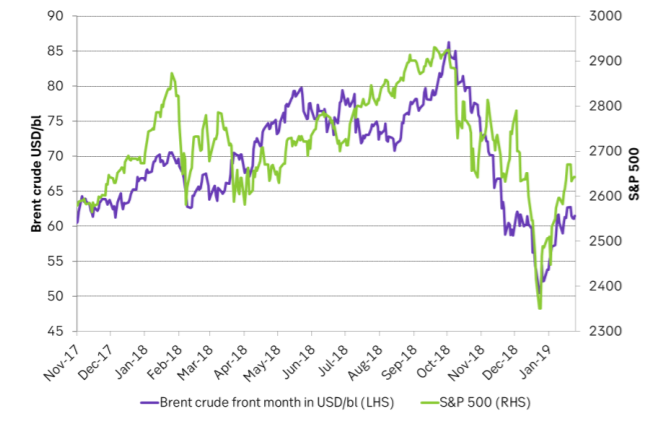 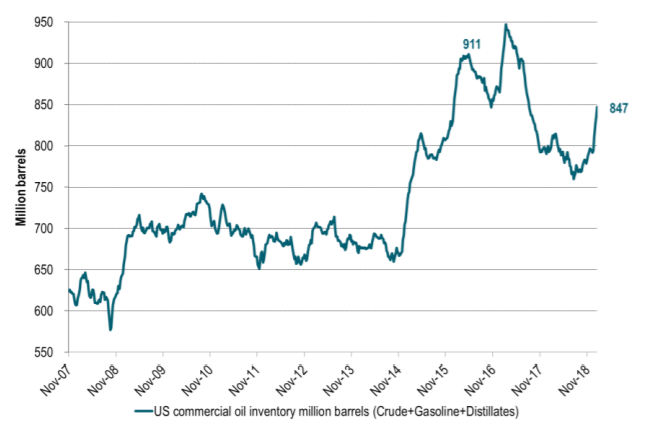 Ch3: Refining margins have been murdered by the crash in the gasoline crack (to Brent). Now gasoil and diesel cracks are also ticking lower as we moves towards the later part of the Nordic hemisphere winter. 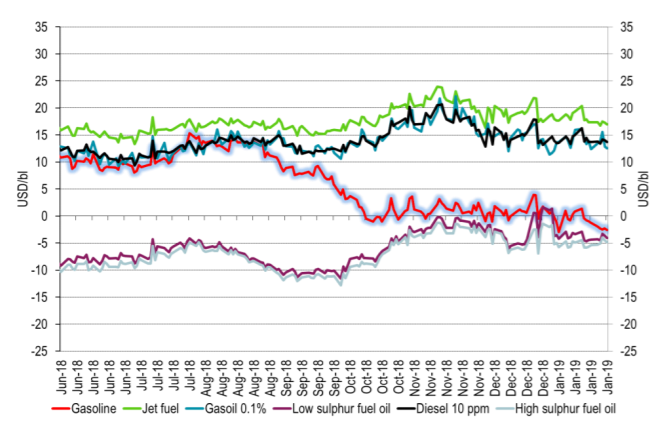 Ch4: Not so difficult to be booming shale oil as long as some 3 m bl/d is removed from supply from other suppliers. Booming US shale oil supply in the US is bad for Iran. The higher it goes the more room it gives Donald Trump to tighten Iran sanctions yet tighter. 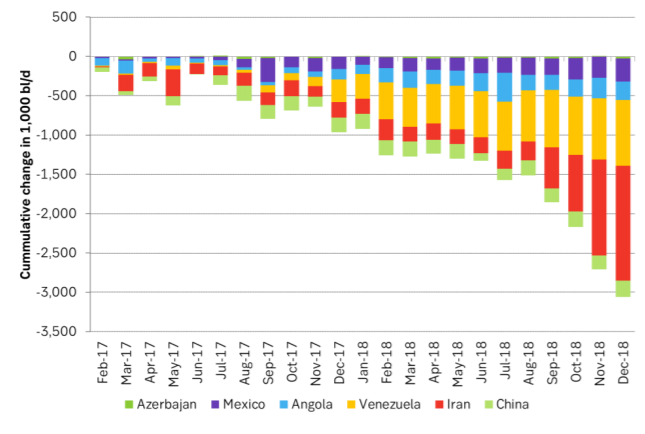 Ch5: Brent crude curve has flattened significantly since the low of 24 December 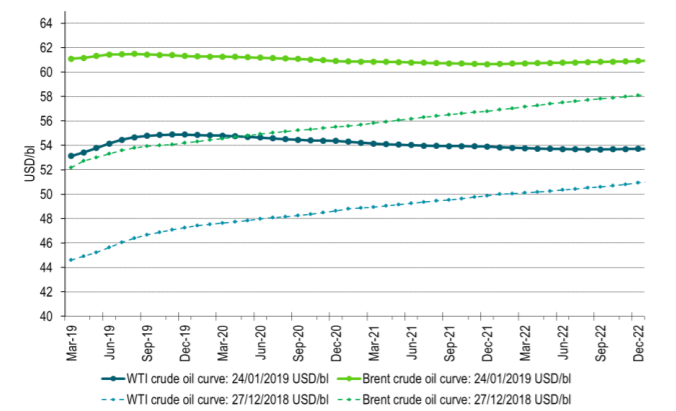 Ch6: The shale oil volume weighted WTI crude price has come down from $72.3/bl. But it has rebounded back to close to $55/bl which would imply “medium shale oil heat” if it stays at that price level. Access to capital is probably just as important as the oil price. 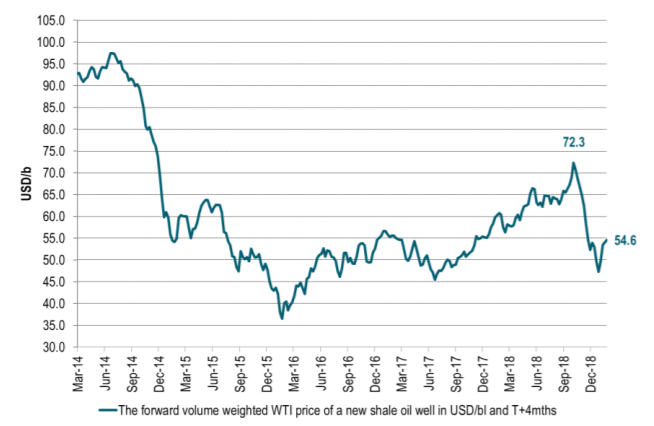 Ch7: US oil rig count has ticked lower but not all that much yet 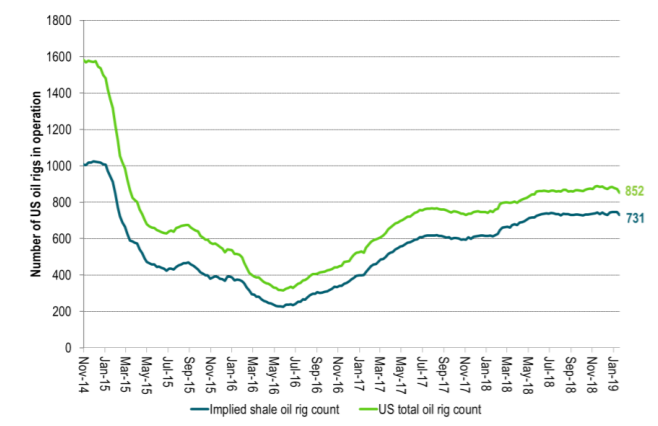 Ch8: The local Permian crude oil price traded at a huge discount versus Brent and WTI at times in 2018 as lack of pipelines out of Permian basin led to land-locked oil in the Permian 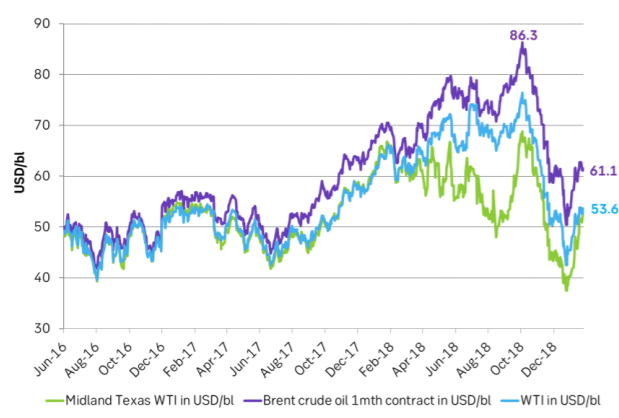 Ch9: Permian is obviously no longer very land-locked with respect to getting its oil to Cushing Oklahoma WTI and Permian prices are now almost equal again. 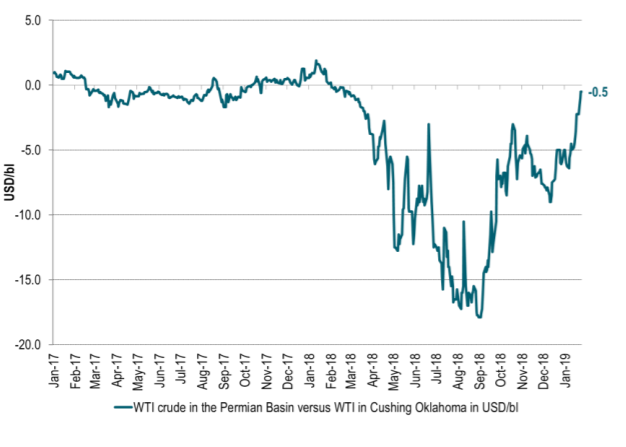 Ch10: Losses in existing US shale oil production will be 530 k bl/d/mth in February according to the US EIA. The most ever. I.e. more and more new wells need to be completed in order to counter this rising loss. 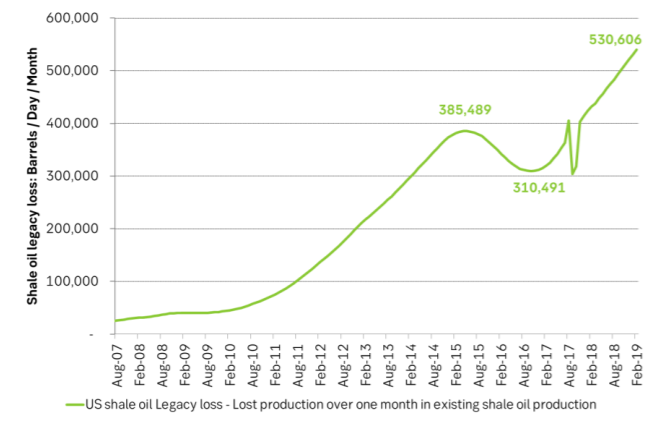 Ch11: Number of completed shale oil wells moved sideways in Oct and Nov and then down in December. 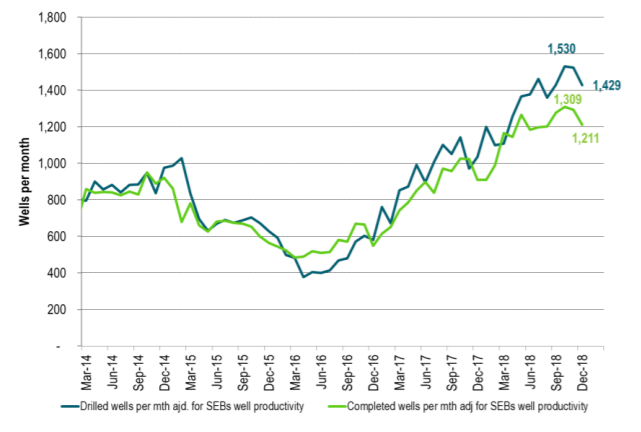 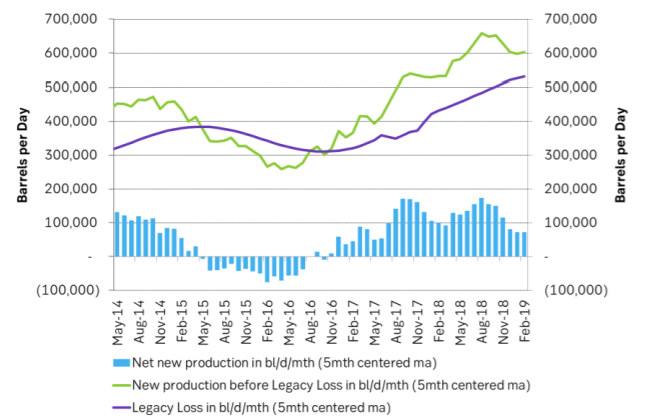 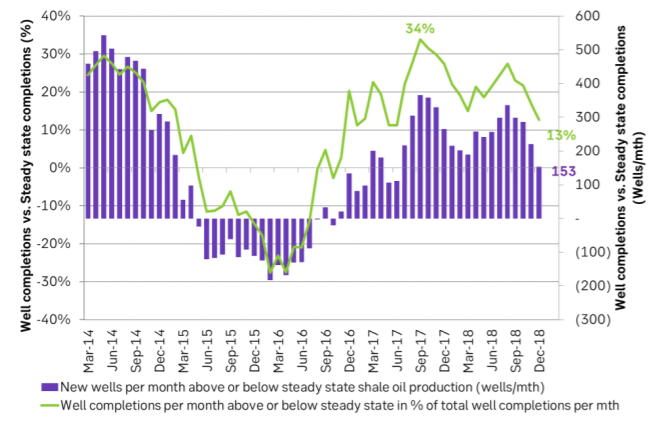 Ch14: Shale players are however still drilling way more than they are able or willing to complete. There is thus probably a significant inventory of DUCs which they can complete without drilling. So there is room for drilling rigs to decline significantly without a comparably significant decline in well completions. 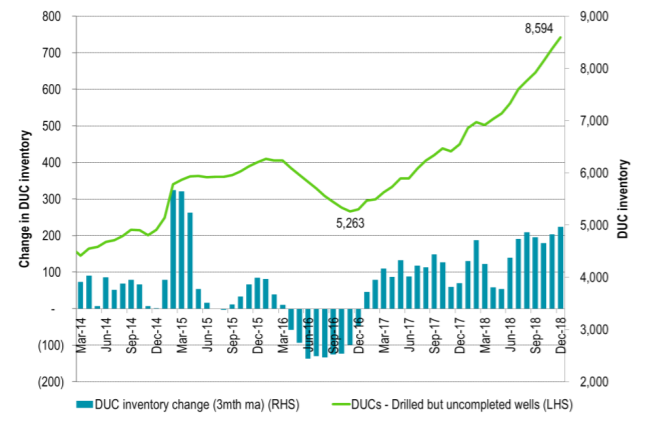 Ch15: Well productivity ticks higher at a pace of about 5-10% per year. But number of completed wells/mth is more important 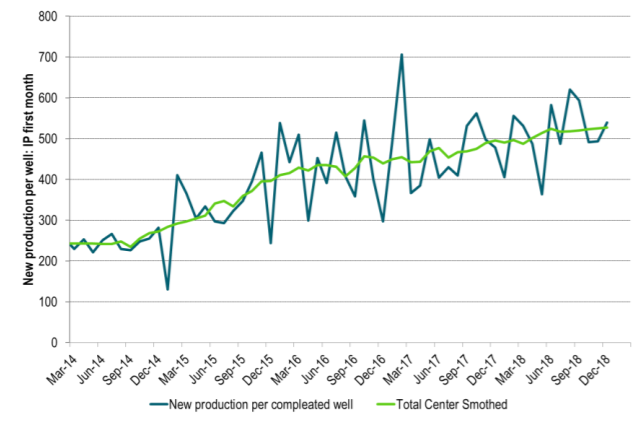