The front month Brent crude contract sold off 5% yesterday with a clos at $53.11/b. This was the lowest close for front month Brent since early December 2016 and clearly a break out of the close, sideways trend around $55/b which has been in place since OPEC decided to cut production in late November. Technically the Brent crude May 17 contract broke the important support level of $54.64/b. The next support level for the contract is $52.86/b and that has already been broken in today’s trading with Brent crude now trading at $52.3/b. Net long speculative positions are close to record high so if the bearish sentiment continues then oil prices are naturally and clearly vulnerable to the downside. That is where the pain-trade is.

It is worth mentioning that in a week on week perspective there has been a broad based sell-off in commodities in general with all sub-indices selling off between 2.6% and 4.4% and the total commodity index down 3.5%. In a week on week perspective Brent sold off 5.8% so a little more than the total energy index which sold off 3.9%. Still, oil was not alone in the sell-off. I.e. It was not just oil specific reasons for why oil sold off over the last week even though the sell-off came yesterday. In the background for all assets is the market concern for higher US interest rates which is hurting bonds, equities as well as commodities. Gold which is definitely sensitive to higher interest rates sold off 3.3% over the past week. The bullish US employment statistics yesterday probably helped to underpin the expectation for higher US rates.

Longer dated crude oil contracts also sold off yesterday with the Brent crude December 2020 contract closing yesterday at $53.74/b which is a new fresh low since April 2016. As stated earlier we expect this contract to trade yet lower down towards the $50/b mark in a pure neccessity to lower the implied shale oil profitability offered US shale oil players on a forward crude oil price curve. More than anything it is the one to three year forward contracts which needs to move lower in order to stemm the current strong rise in shale oil rigs and shale oil investments. Since OPEC decided to cut production in late November 2017 US shale oil players have been offered a nice profitable lunch on in the forward market basis.

Crude oil comment – US crude oil production, only a lower price can slow it down

If US crude oil production continues to grow at the pace we have seen since the start of the year, then it will pass its past peak of 9.61 mb/d (which was reached in June 2015) by mid-June 2017. That is not our projection, just a pure mathematical extrapolation.

Shale oil service costs, labour costs and material costs are tellingly definitely on the rise. This could definitely slow down weekly rig count additions if the cost side starts to bit significantly. In that case the oil price would not need to move all that much lower in order to slow down rig count additions. However, we have not seen that effect yet. Normally there is a time lag of 6-8 weeks from the oil price moves to when we see a reduction or increase in the weekly US shale oil rig count numbers. As such even if the oil price now continues yet lower we are likely to see that the US shale oil rig count increases by 9-10 rigs every week the next 6-8 weeks.

We still think that oil inventories will fall in Q2-17 and as such give support to prices. Our expectations is to see the highest Brent crude oil price to be printed in Q2-17. However, US crude oil prodution is now growing so strongly that market focus is shifting away from OPEC cuts and over to US production growth. We had not expected this to happen before in late Q2-17.

Then we are left with the question – What will OPEC do in the face of strongly rising US crude oil production? The can decide to cut also in H2-17, but does it make sense? We think not. US shale oil production response is too fast and too flexible. 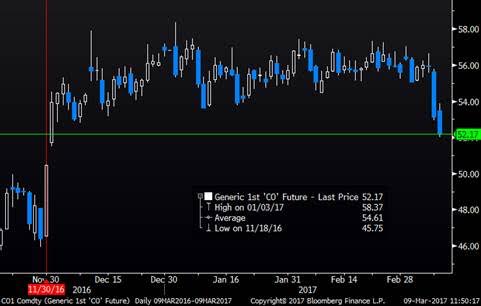 Ch2: US crude oil production rising strongly – too strongly. Now just 0.5 mb/d below prior peak
If it continues at this pace then US crude production will pass the 9.6 mb/d mark in June 2017 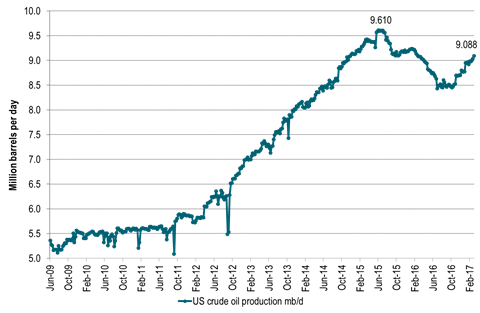 Ch3: Brent crude oil 1mth contract adjusted for US dollar strength since July 2013.
For all those longing for a Brent crude oil price of $60/b it is worth remembering that
if we adjust for the 23% stronger USD since July 2013 a Brent price today of only $51/b actually equals $63.6/b in 2013 USD terms.
In that perspective we are already “back above $60/b”. Acutally we were close to $70/b in 2013 dollar terms when Brent averaged $55/b so far this year. 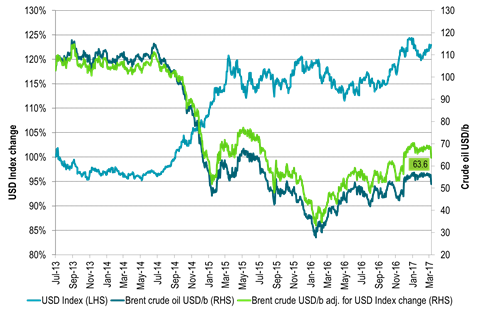