Marked has placed all chips on the long side betting on an extension of OPEC/non-OPEC production cuts which officially ends in Q1-18. In general we do think that OPEC/non-OPEC will manage the market and hold back production if needed through 2018 in order to secure further gradual draw down of OECD inventories. However we also think that it would be better for OPEC/non-OPEC to make hard decissions on this in Feb/Mar getting as much data as possible before making that decission. That is also what the group has mostly consistengly communicated through the autumn. The market seems to expect and demand a firm decission right now this week. As such the market is rigged for dissapointment with a possible short term sell-off as all chips are on the long side.

On Thursday 30th OPEC and some non-OPEC producers will meet in Vienna to discuss whether to extend current production cuts or not.

The communication all through the autumn has been that they want to make this decission in February/March 2018 in order to have as much data on the table as possible before making the decission.

That makes a lot of sense since there is substantial dissagreement with respect to how much oil is needed from OPEC in 2018.

Somehow the market has geared it self up to an expectation that OPEC/non-OPEC needs to make a firm decission on this right now on Thursday. And further that the decission will be an extension of current cuts maintained all to the end of 2018.

As such it seems to us that there is a substantial risk that the market is setting it self up for a dissapointment this week. For us it makes much more sense for the group to make this call in Feb/Mar which is also what they mostly have been communicating all through the autumn.

The challenge for the group this is week may thus be all about managing the market’s expectations. How not to let the market down when it communicates that the decission will be taken in Feb/March.

And if there is a decission this week it is likely going to be a sign of intention: “If needed we’ll maintain cuts to the end of 2018”, or “We’ll maintain cuts to June 2018 and then make a new assessment”, or “We are all in agreement that we’ll extend cuts as long as needed in order to drive OECD inventories down to the 5 year average”.

That is indeed a trickey reference. This is because for every month we move forward the 5 year average reference is rising. Since March 2017 the OECD inventories have declined some 0.7 mb/d when adjusting for seasonal trends (given by the 2010-2014 seasonal average profile). If we extend this decline rate on top of the seasonal trend (2010-2014) we actually almost get all the way down the 2013-2017 average profile.

The big question though is what is really needed in order to secure a balanced oil market in 2018? There is a significant dissagreement on this. The IEA says that call-on-OPEC will be 32.4 mb/d in 2018. SEB’s estimate is 32.7 mb/d, the US EIA’s is 32.7 mb/d while OPEC’s own estimate is 33.4 mb/d. Variations on this comes down to projections for demand, US shale oil production and the level of OPEC’s NGL production in 2018.

Thus beeing carefule about committing to further cuts now on Thursday seems kind of sensible with the aim of instead making that decission in Feb/Mar.

Market participants are seemingly all expecting OPEC/non-OPEC to make a firm and clear decission this Thursday for extending current cuts to Dec-2018. Net long speculative positions for Brent and WTI together are now very close to all time high. US oil rig count has started to rise again (+9 rigs last week). The decission to add these 9 rigs was probably taken some 6-8 weeks ago when the WTI forward price only stood at $51-52/b. Now that reference WTI price stands at $55/bl with a clear risk for a rise in rig count in the weeks to come. The outage of the 590 kbl/d Keystone pipeline due to an oil spill has reduced supply into Cushing Oklahoma by some 4 mbl/week. It has helped to reduce Chushing inventories and to drive also the WTI crude curve into backwardation. However, the Keystone pipline is likely to back in operation within a week or so.

Thus overall there is a fair chance that the market will be dissapointed on Thursday. That there will be no firm decission even though there will be firm support for further cuts if needed. And if OPEC/non-OPEC actually do make a firm decission to maintain cuts all to the end of 2018 then there may not be much upside price action since that decission is already so highly priced in already.

Thus buying a put option on the front month WTI contract with short time to expiry may be a good strattegy in the run-up to this week’s digital OPEC/non-OPEC decission risk on Thursday.

Our general stand on OPEC/non-OPEC cuts for 2018 is that further cuts are likely needed but also that if needed we expect OPEC/non-OPEC to manage the market in order to prevent inventories from rising back up.
Needed cuts will likely be of a magnitude which are perfectly manageable for the group. Why through away all they have acchieved in 2017 with inventory draw downs when they can hold back a little supply. 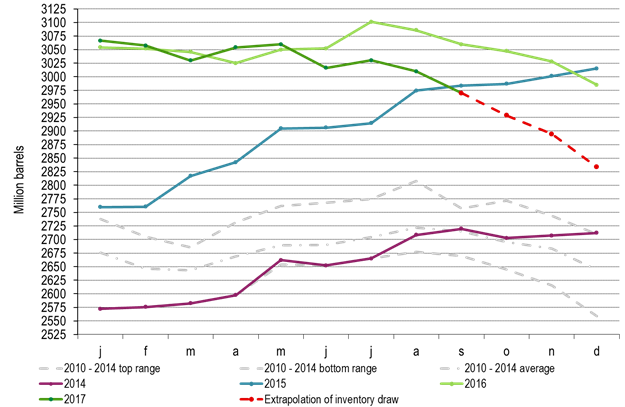 Ch2: OECD inventories. Which 5 year normal should you use? The 2013-2017?
If the latter then mission acomplished in December 2017, but we won’t know before February 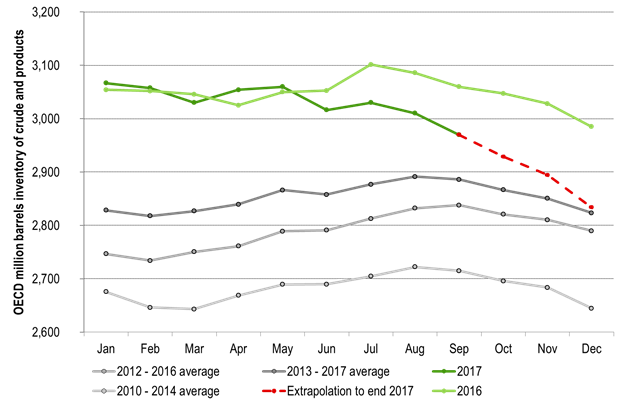 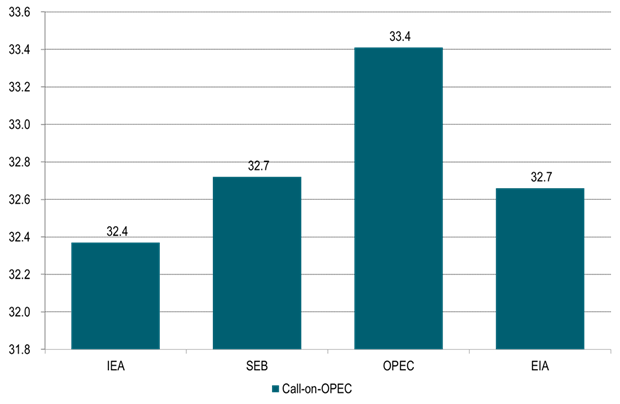 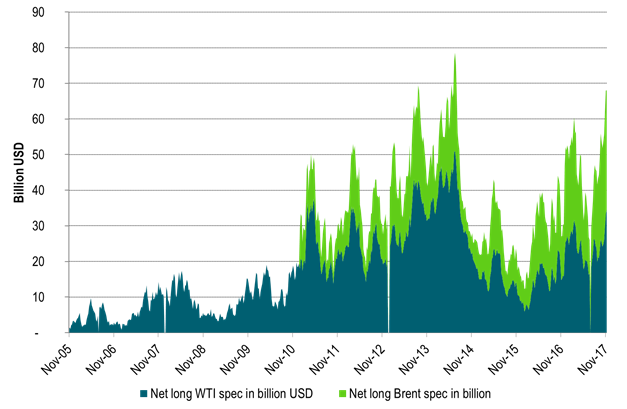 Ch5: US oil rig count has started to rise again 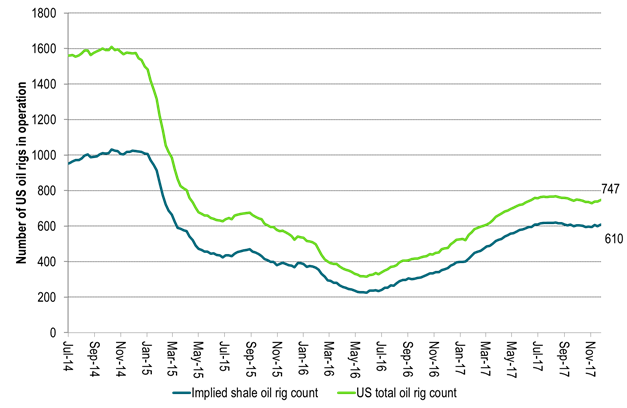 Ch6 The increas in rig count we see now came from price signals some 6-8 weeks ago
Since then the WTI curve price has moved from $51/bl to $55/bl.
The effect of the price rise over the past 6-8 weeks will be visible in terms of rig count over the coming 6-8 weeks 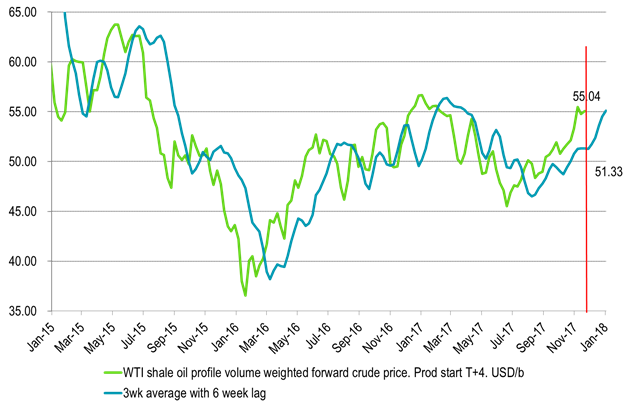 Ch7: Risk of rising rig count in the weeks to come
Could weight bearishly on the WTI crude oil price 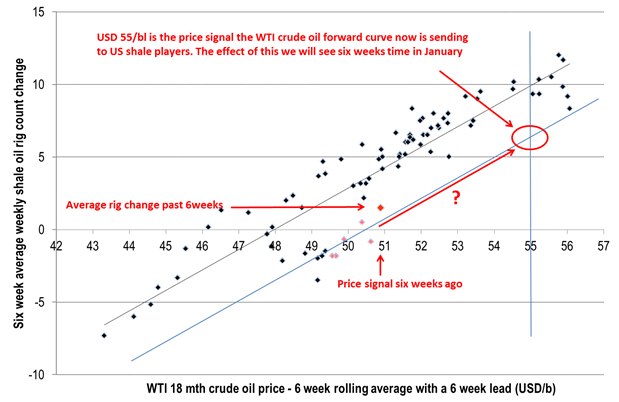 Ch8: While US crude oil production continues to rise
Will it rise 0.7 mb/d or 1.5 mb/d next year? 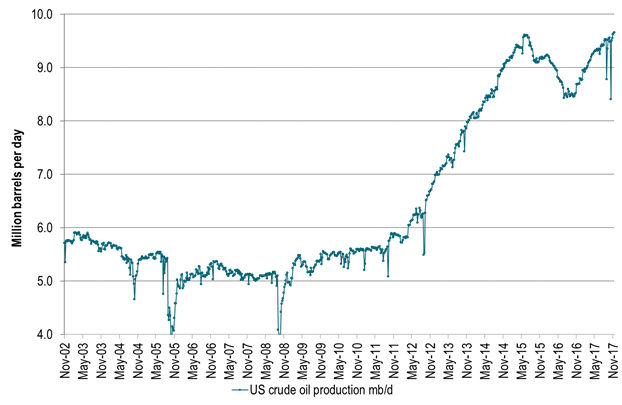 Ch9: WTI crude oil curve shifted into backwardation following the outage of the Keystone pipeline which feeds 590 kbl/d of Canadian oil into Chushing Oklahoma
The Keystone pipeline is likely going to be back on line within a week or so which could push the WTI curve back into contango again 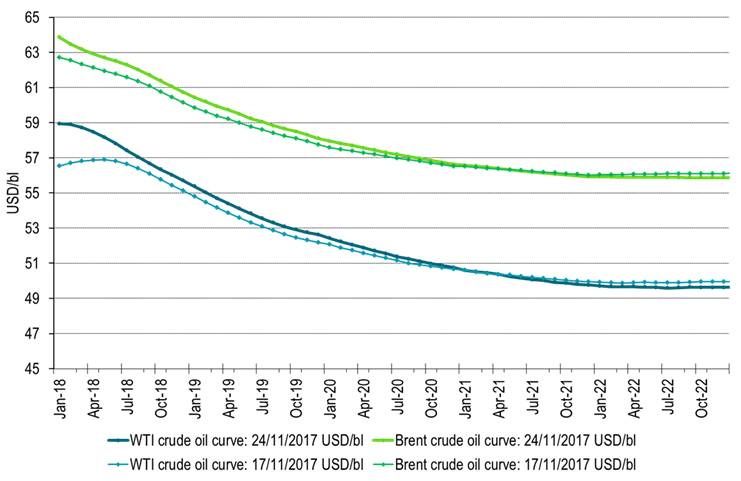 Donald D-Day in the oil market