Crude oil comment – Up last week on 12 mth expectations – Lower this morning on shorter term bearish focus
Brent crude traded up last week on perspecives of oil market balance 12 mths down the road as oil companies reported substantial spending and production cuts for 2016. Focus today is more short term oil market balance with more oil from Russia, more from OPEC and China stats being bearish and so are equities. Only support today is from a somewhat softer USD, but that is not enough.

Brent crude is trading 1% lower this morning at $49.0/b amid bearish equities that are driven lower by somewhat bearish Chinese manufacturing gauge. A 0.1% softer USD adds some support to commodities with industrial metals gaining a comparable gain. News that Russia increased crude oil exports by 1.7% m/m and 10% y/y in October with total crude oil production reaching a record of 10.8 mb/d is definitely bearish news. Friday’s decline in US oil rigs (minus 16) is somewhat supportive for the oil price but we doubt it is enough. Last week’s oil price gain came on the back of expectations for the oil market balance 12 mths down the road. Today we have bearish China statistics, rising Russian crude oil exports, rising OPEC production and the risk should be skewed to the downside.

Crude oil price last week – Up on 2016 projected spending cuts by oil companies
Brent crude gained 3.3% last week closing the week at $49.56/b while WTI gained 4.5% to $46.59/b. The gains in crude oil was thus fairly detached from other parts of the commodity complex where industrial metals lost 1.9% along with emerging market equities which lost 2.4% over the week. Otherwise there were just smaller changes in the USD and global equities overall thus limited driving forces from that part.

The big jump in the oil price in the middle of the week was most likely driven by the news that Hess announced a projected 27% spending cut for 2016 also projecting a production decline of 8.7% next year. Since then we have seen other oil companies announced comparable measures. Thus the higher price last week was on the basis of changes in expected balance of market 12 mths down the road.

US statistics showed that US crude oil production rose slightly w/w to 9.1 mb/d with production there being basically sideways since start of September (weekly statistics) despite a steep fall in oil rig count since then. US oil inventories were slightly mixed with total stocks slightly lower but crude oil stocks rose 3.4 mb, 5th rise in a row. US oil rig count declined by 16 w/w which probably helped to add support to crude oil prices at the end of the week. Monthly statistics by the EIA showed that US crude oil production only declined by 45 kb/d from 9.37 mb/d in July to 9.32 mb/d in August. EIA’s projected December production is 9.0 mb/d. Linear extrapolation (decline rate from weekly stats) starting at August production of 9.3 mb/d places December average at 8.9 mb/d which is fairly close to the EIA’s own projection. 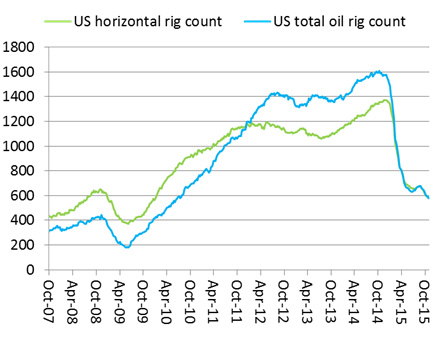 US shale oil wells have a production productivity gain of around 2% m/m. It has been higher than this over the last year (~3%) due to high-grading (concentrating on sweet spots). If we assume a normal 2% m/m well productivity growth, then the number of US oil rigs can decline by 2% m/m as well while keeping US crude oil production steady state. This equates to a US oil rig decline of about 2.5 to 3.0 w/w. Since the start of June the US oil rig decline has averaged 2.8 rigs per week. 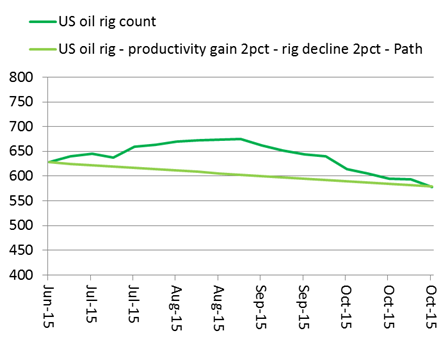