Declining US shale oil rig count is likely going to allow the mid-term WTI crude curve to move from current $51/b up towards the high of the year of around $56-57/b
Increasing US crude production is placing increasing strains on US crude oil export bottlenecks leading to further widening in the Brent to WTI crude spreads.
As a result mid-term forward Brent crude prices have the potential to move to $61-62/b when mid-term WTI moves to $56-57/b.
Further global inventory draws are likely to add yet steeper backwardation to the Brent crude curve which would allow the Brent 1mth contract to rise towards $65/b ($3-4/b above the Brent mid-term crude forward prices).

The Brent 1mth contract reached its highest price level since March 2015 in late September ($59.49/b) and is trading just $1.6/b shy of that level today at $57.88/b.
Conversely the medium term WTI forward prices have set no such new ytd highs. If we look at the rolling WTI 18 mths contract (1.5 years forward) it reached a high of the year in early January of $57.39/b.
That was real shale oil stimulus resulting in lots of additional shale oil rigs and drilling. On Friday however it closed at no more than $51.02/b with the highest price this side of the summer being $51.7/b

At the moment we see that US shale oil players are kicking out shale oil drilling rigs. Just last week they kicked out 7 shale oil rigs. Since early August they have kicked out 30 oil rigs and 24 implied shale oil rigs.
Assuming a 6 week lag between price action and rig count reaction this shedding of US oil rigs is taking place at a forward WTI18 mth crude price of $50-51/b (6 weeks ago).

The US shale oil players are thus sentiment wise telling the market that WTI at a medium term forward price level of $50/b is not enough for them to keep the current rig count running.
They are kicking out rigs at $50/b. Thus while empirical market experience from May 2016 to July 2017 was that the US shale oil rig count inflection point was around $47/b (18mth forward) it has now clearly shifted higher than $50-51/b.

We believe that the market dynamic with respect to US shale oil is much about trial and error. Having figured out that it is now no longer at $47/b and that it is now also higher than $50-51/b it now remains to figure out where it has moved too. Thus the next test should now be to figure out where the US shale oil rig count change versus WTI 18mth forward price level relationship inflection point has moved to. I.e. the market should allow the forward WTI18mth contract to move upwards. Acceptable moves upwards in perspective of what we have seen earlier this year would be that the WTI 18 mth contract moves to $55-56/b.

One reason why such a move higher for the WTI 18 mth price horizon is reasonable to expect is because even though the WTI crude curve is in contango at the very front end of the curve there is still an overall backwardation in the forward WTI curve structure. The consequence of this is that shale oil producers now have to sell at a discount to front end prices if they want to sell forward hedging their future production. This typically leads to reluctance and reduced forward selling by producers. Consumers however experience the opposite. Consumers can now buy forward at a discount to front end prices which typically leads to more forward buying. Thus less forward selling and more forward buying should typically help to lift the mid-term forward crude prices higher both for Brent and WTI.

Thus in total the Brent 1mth contract has an upside potential of another $7/b. The move would place the 18 mth WTI price at $56/b versus ytd high in early January of $57.39/b and current $51/b. It would place the Brent 18 mth contract at $61/b and a new ytd high and highest since April 2015 and it would place the Brent 1mth contract just shy of $65/b. And still US shale producers would not be stimulated with a higher forward price than WTI 18mth at $56/b. Maybe that is where the US shale oil rig count to WTI18mth inflection point has shifted to? At the moment it is at least higher than $51/b given data since early August.

The sentimental drivers for such a move higher is going to be further draw downs in inventories (yes, market is running a deficit due to OPEC+ production cuts), further reductions in US shale oil rig count (yes, we expect US shale players to kick out 5-10 rigs every week to Christmas to balance drilling versus completions), further accumulation of net long Brent spec into the backwardated Brent crude curve with positive roll yield, emergence of geopolitical risk premium in crude prices as stocks move lower, stronger and stronger signals from Saudi Arabia and Russia that they are willing to extend cuts to end of 2018 topped up with forecasts pointing to a cold US winter ahead (stronger La Nina event) with US Atlantic coast mid-distillate stocks now below 5yr average.

However, there is a reason for why Saudi Arabia and Russia both are signalling elevated willingness to extend current production cuts all to the end of 2018. They are concerned for the oil market balance in 2018. And with good reason. Since November 2016 when OPEC+ decided to cut production there has been a veritable shale oil drilling party with an accumulation of 1735 uncompleted wells and the accumulation continued also in September adding another 179 uncompleted wells lifting the total to 7270 uncompleted wells. In comparison the shale players completed 10161 wells over the 12mths to September and on average 847 wells per mth.

Thus if 2017 was a US shale oil drilling party then 2018 may be a shale oil completion party. US shale oil completions have been rising every month since January. In December 2016 completions stood at a low of 645 wells rising to 1029 in September and still rising. If completions average 1100 wells per month in 2018 then it would be 30% higher than the average of 847 in the 12 mths to September. In our view the US shale oil players today have too many active drilling rigs. They should spend their money on completions rather than drilling. That is what creates oil and cash flow. Thus the natural thing to expect is a further decline in the drilling rig count. Maybe another 100 to 200 rigs down and at the same time to expect a further increase in completions and eventually a draw down in the inventory of drilled but yet uncompleted wells.

Ch1: US shale oil players are kicking out drilling rigs with WTI 18 mth contract at $51/b 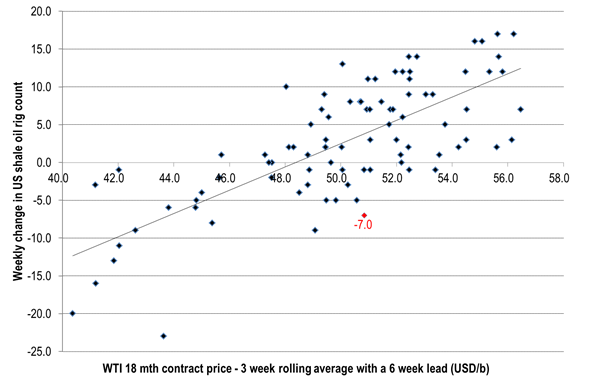 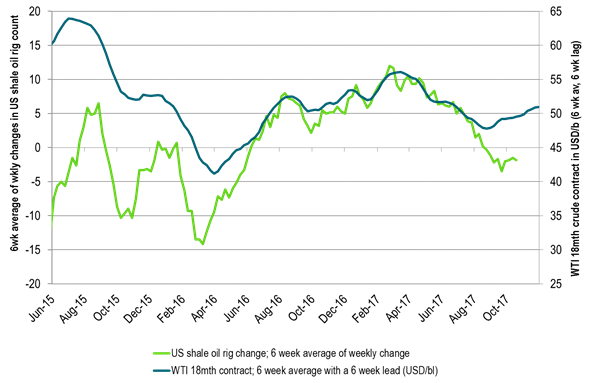 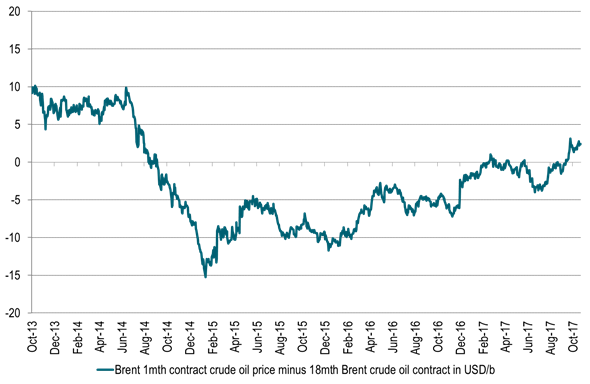 Ch4: Rolling Brent 18mth price spread to the rolling WTI 18mth crude price
The spread is expanding as the US crude production is increasing
Higher spread will allow the Brent18 mth contract to move relatively higher versus the WTI curve without stimulating US shale oil production
More to come as US crude production continues to rise 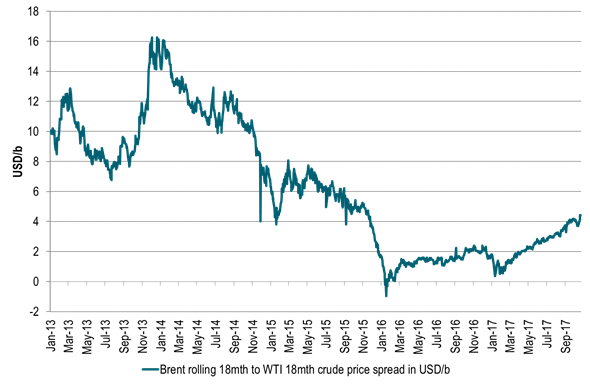 Ch5: WTI 18mth forward crude oil price. Still lots of room on the upside before getting back to ytd high 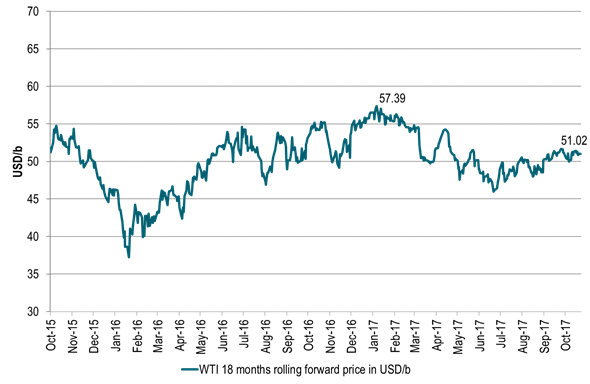 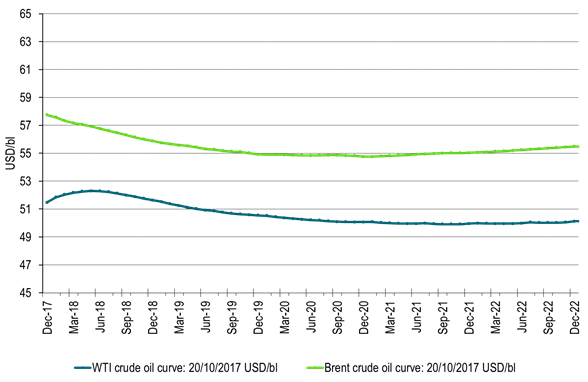 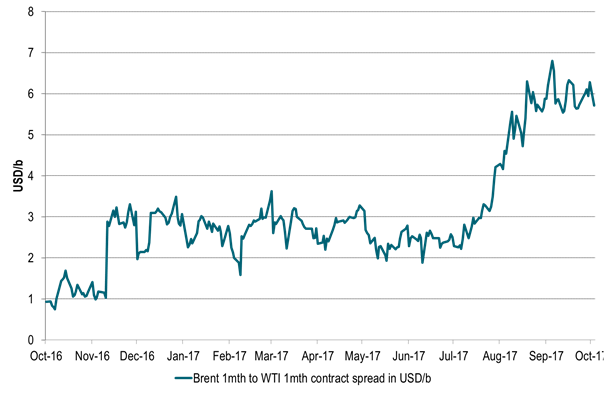 Ch7: Resulting in a big jump in US crude oil exports
This will drain US crude inventories and flip front end WTI contango into backwardation 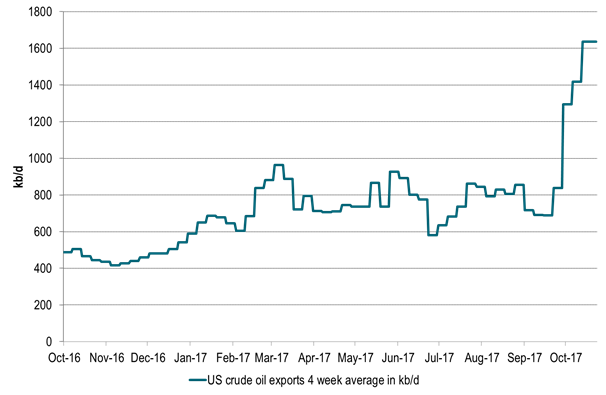