Oil price bottoming in Q1-19 seems like a fair bet

Q1: When will pledged cuts by OPEC+ become visible in oil inventory data?

Q2: When will we see softer US oil production growth due to lower oil prices?

Q3: When will the global growth cooldown bottom out?

These are probably the key questions for when the oil price sell-off will bottom out as well. As of yet we have seen none of the above. US oil production continues to rise strongly while global growth continues to deteriorate.

The latest PMI’s in Asia have declined below the 50 line and thus into contractionary territory. The US EIA official October crude oil production came in at 11.537 m bl/d which is 177 k bl/d higher than what the EIA used for October in its latest monthly report. The EIA will likely have to lift its US production projection for 2019 accordingly.

During Q1-19 however we should probably see some positive effects of the cuts by OPEC+, some US oil rig count decline due to lower oil prices while the low point in bearishness over global growth will hopefully have bottomed out.

The front month Brent crude oil price declined 19.5% from end of 2017 to end of 2018 when it settled at $53.8/bl. Medium term oil prices however moved very little as the the rolling Brent crude 3yr contract only moved down 0.8% to $57.72/bl. It was of course not just oil prices which had a bad year in 2018. Industrial metals also sold off 18.6% along with emerging market equities which declined 16.6%.

This brings us back to Q3 above: When will we see global growth cooldown bottom out? As we have seen with the latest PMI’s the signs are still pointing negative and lower. Data for US Q4-18 GDP is due on January 30th. This has the potential to be a real disappointment and could as such be the low point as it could change the direction of the Fed’s tightening monetary policy path.

Q1 above is a bit tricky. Firstly because the pledged cuts from OPEC+ are not so big that we expect to see a steep decline in inventories but rather inventory stabilization. Thirdly because there is typically a significant delay from cuts appears to when inventories are impacted and lastly because there is also a lag in the reporting of the OECD inventories of about two months. So when we get the IEA report in April we should have the OECD inventory data for February which then should hopefully show a good stabilization of inventories. Before that we have to contend with weekly inventory data which will be followed closely and which definitely can provide some positive news much earlier than the IEA reports in March and April.

On Q2 above there have been a few US shale oil companies who have signalled that they will reduce activity/spending on drilling and completions in 2019 due to lower oil prices and we expect to see more of this. This has however not yet been reflected in a lower rig count or a lower level of well completions. During the previous “shale oil reset” the typical price inflection point was when the WTI 18 months forward crude contract moved above $45-47/bl. That was when the US shale oil rig count started to rise back in June 2016 however with a typical 6 week time lag versus the oil price. At the moment the WTI 18 mths contract trades at $48.8/bl and over the past 6 weeks it has averaged $52.2/bl. The comparable local Permian crude oil price does however trade some $5-6/bl lower with a proxy “Permian 18 mths contract” averaging $45/bl over the past 6 weeks. As such we could start to see weekly US oil rig count declines about now.

If we look ahead into Q1-19 we are likely to experience yet more negative headwinds for oil from the macroeconomic side potentially culminating with a bad Q4-18 US GDP report on 30 January. Some US oil rig count decline should materialize at current oil prices but the US EIA is likely to revise its projection for US 2019 crude production higher in its STEO report in January due to the latest October data. Inventory draws as a result of cuts by OPEC+ may not be so easily visible for a while but avoiding a steep inventory increase in H1-19 is what the market needs to see. A bottoming for the oil price during Q1-19 seems like a fair bet with higher oil prices thereafter.

Ch1: Lower oil prices have not yet started to drag US oil rig count lower. Current prices should lead to declines in Jan/Feb 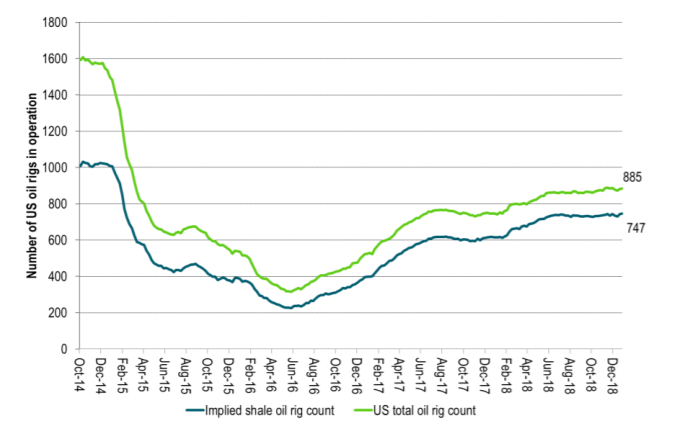 Ch2: OECD oil inventories with a two months lag. Cuts by OPEC+ starts in January. Inventory effects may be visible in weekly inventory data in Jan/Feb but we will not see OECD inventoris for Jan/Feb before IEA releases its monthly oil report in Mar/Apr. OECD inventories were probably close to unchanged from Dec-17 to Dec-18. 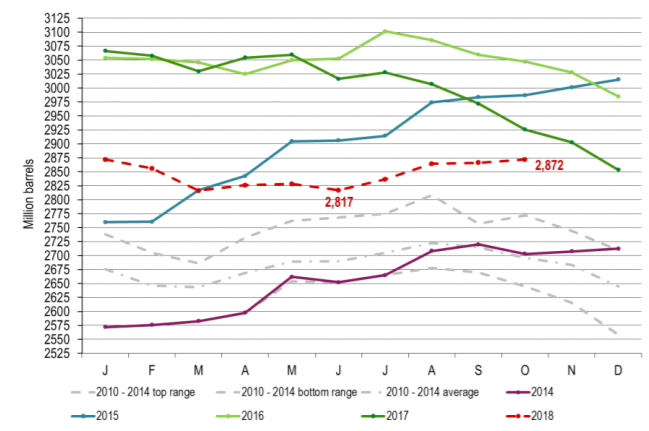 Ch3: Industrial metals, emerging market equities and oil were not so different after all. A turn to a more positive outlook for global growth in general and emerging markets specifically may be needed to push all of them higher again even though OPEC+ is lending a helping hand to the oil market through its cuts. 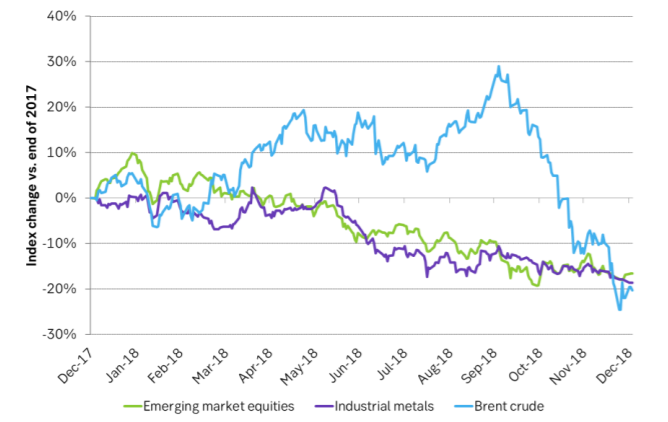 Ch4: Crude oil forward curves end of 2017 versus end of 2018. Difference is all in the front end of the curves. One year ago it was a tightening market, declining inventories and backwardation with speculators rolling into the market. Now it is contango, weakening global growth backdrop and slightly rising inventories and a huge exit of speculators from the market over the past 6 to 9 months. The longer term price anchor with Brent crude pegged around $60/bl is however intact. A flat, neutral oil market should thus maybe be around the $60/bl mark for Brent crude. Though with a question mark for the Brent to WTI crude oil price spread which may evaporate with new oil pipelines coming on-line in 2019/2020. 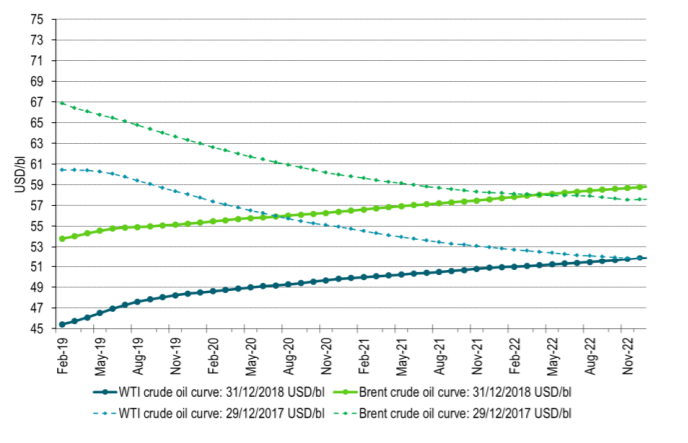 Ch5: Speculators will roll back into the market again at some point. Not a lot of net long spec in Brent crude at the moment. 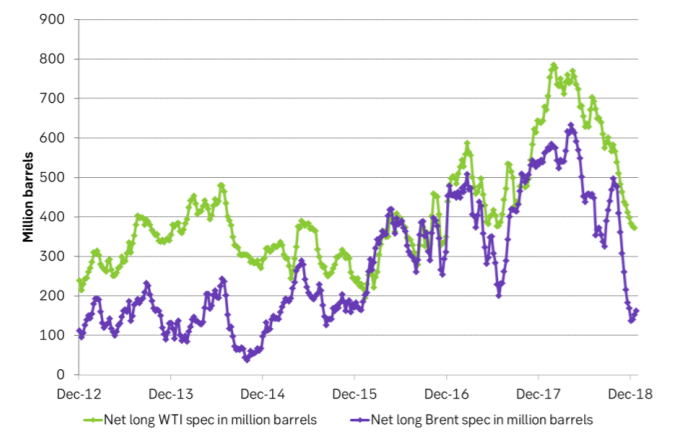 Cutting supply of “black crude” will feel like more