A market consensus is forming with Brent crude centering in on $55/b. Caught between the OPEC put at $50/b US shale oil likely to expand strongly above $60/b

Price action – Could not find more room on the downside

After closing close to the intraday low on Wednesday at $53.92/b it did not take much for the oil price to close up 0.4% yesterday at $54.16/b. It traded fairly stable through the day but after some early gains it fell back again following rising US oil inventories and declining US refining utilization.

Crude oil comment – Market consensus is forming. Brent crude centering in on $55/b

A market hypothesis is starting to form being that the “OPEC put” is placing a floor price for Brent crude at $50/b while US shale oil is placing a cap on the upside at $60/b as that would strongly accelerate US shale oil production. Last year prices were swinging wildly as strongly convicted bulls as well as bears were tugging the oil price in opposite directions. Substantial uncertainties regarding the actual supply/demand balance last year also added force to the price swings. Realized, daily, annualized volatility came in at 44% versus a historically more normal 30%. As a new consensus is starting to form, the fog around the oil market balance is starting to clear and the oil price is likely going to start to stabilize.

Last year there were definitely huge doubts about to what degree the US shale players were hurt and weakened by the downturn. Would they be able to respond to higher prices or would they just slowly limp along with little response despite higher prices? Few placed much faith in any OPEC action as production from that side mostly was rising strongly. Now however the uncertainty around both of these factors has cleared to a large degree. US shale oil producers look close to live and kicking. They added 180 rigs in H2-16 in response to a US shale oil relevant WTI forward curve price averaging $52/b in H2-16. Price action is responding to this and we see the Brent crude oil prices have been rejected to the upside at $57-58/b and supported to the downside around $54/b. There are of course still a lot of wet dreams out there about much higher prices ahead, but for now a market consensus seems to be forming around these two supply forces: OPEC cuts at $50/b versus US shale supply boost at $60/b.

The IEA yesterday released its monthly oil market report. Notable again was that OECD inventories was heading down for the fourth month in a row. From December 2015 to November 2016 they were up by only 17.5 mb versus a normal seasonal gain over the same period of about 39 mb. Thus over the last year the OECD commercial inventories actually declined 21.5 mb versus normal for that period. This is really the proof of the pudding: Inventories did not rise last year, thus the oil market was in balance. We have several times before commented that the IEA had an inconsistency when they reported sideways inventories while at the same time putting forward an estimated surplus of 0.7 mb/d (256 mb) for the year. And sure enough, yesterday they adjusted down their estimated surplus from 0.7 mb/d to 0.5 mb/d. We think they still have this estimate too high and that in the coming months or year they will adjust it down to about 0.2 mb/d. That is at least our estimate.

Today at 19:00 CET we have the US rig count by Baker Hughes. For the two weeks of the year there has only been added 1 new shale oil rig versus a weekly average of 6.1 rigs/week in H2-16 and versus our expectations for 7 additional shale oil rigs per week in H1-17 in response to a shale oil relevant forward curve WTI price which now stands at $55/b versus $52/b in H2-16.

Ch1: OECD commercial oil inventories – There was no surplus in 2016 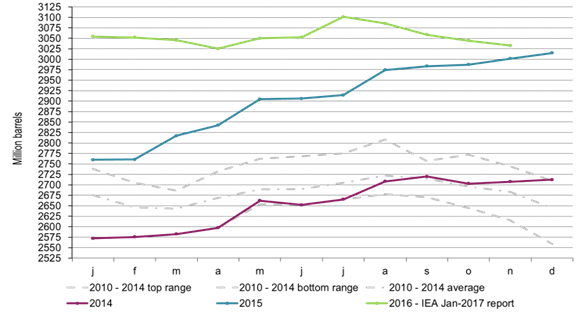 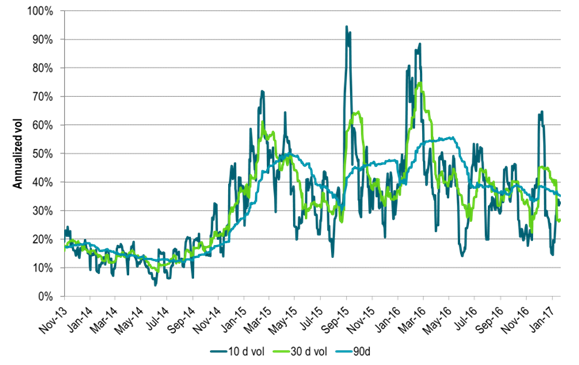 Crude contango in the US but Brent spot is strong