Crude oil price action – Prices declined last week despite positive tailwinds from equities and dollar
Brent crude declined 1.7% last week despite the facto f positive tailwinds from a 0.6% gain in global equities and a 1.4% softer USD. Especially the latter should normally have given some support in nominal terms to oil prices. In perspective the other three commodity price sub-indices all made gains last week. Brent crude 1 mth contract closed last week at $48.06/b with its 1.7% decline. The longer dated Dec 2020 contract fell more actually with a decline of 2.8% w/w. This was especially bearish given the 1.4% softer USD. However, what we have said repeatedly is that the forward curve must move lower in order to stem the inflow of oil rigs. At least we got some delivery of that last week. However, so far it is about reversing gains since price trend shifted higher for this contract from June 26.

Following price swings this morning Brent crude is now up 1.2% to $48.6/b after Saudi stated they would cut exports to 6.6 mb/d

Crude oil comment –Saudi Arabia cuts crude oil exports to 6.6 mb/d
Latest: Saudi Arabia has decided to cut crude oil exports to 6.6 mb/d. Last week Saudi stated that they might cut exports by 1 mb/d. Saudi Arabia exported on average 7.2 mb/d from Jan to May. Thus cutting exports to 6.6 mb/d is a real tightening. This is a pure unilateral action. The rest of OPEC and non-OPEC members did not opt for any further cuts at the meeting (still ongoing) in St Petersburg this weekend and today. As such Saudi Arabia is saying that they want a faster re-balancing, faster inventory declines and also a higher oil price. Oil price shifts up 1% to $48.5/b following the statement. It is opportune for Saudi to do this now. Inventories will draw down in H2-17. Thus Said is playing into a positive trend and strengthening it. Net long speculative position by managed money has room to increase and as such prices have the potential to increase in response to a market re-positioning to an increasing long.

A faster inventory draw on the back of Saudi’s export cuts means more flattening of the forward crude oil curves during H2-17 for spot to 1mth contract and for 1mth to 18 month contract.

OPEC & Co’s Joint technical committee met in St Petersburg on July 22nd this weekend. The market may have hoped for a cap on Libya and Nigeria which have boosted production by half a million barrels from October last year (OPEC production reference for current cuts) to June this year. But hopes were probably not too high because there was little chance for this happening. Libya’s production averaged 840 kb/d in June according to Bloomberg which is slightly more than half of its prior production capacity of 1.6 mb/d. Thus there was no chance what so ever that Libya would accept capping production at current level of about 1 mb/d. Production in both Nigeria and Libya are however very fragile. Thus both may fall back again. But there is little OPEC & Co can do about it either way. That was also the outcome this weekend. No cap for Libya and Nigeria was even discussed.

Today OPEC & Co’s Joint ministerial monitoring committee is meeting in St Petersburg. The outcome is already pretty clear. “There will be no discussion of deeper cuts” said Saudi Arabia’s Minister of Energy Khalid Al-Falih. OPEC’s Secretary-General Mohammed Barkindo further stated that: “The re-balancing process may be going at a slower pace than earlier projected, but it is on course, and it’s bound to accelerate in the second half (of the year)”.

We concur with Barkindo. Inventories will draw down in H2-17. Point in case here is inventory draws in data from the last four weeks indicating draws of some 50 mb. During three weeks in June however these data instead showed a gain of close to 50 mb instead. That was part of the reason why oil prices fell in June and bottomed out on June 21st.

In perspective however the number of Drilled, but yet uncompleted wells (DUC’s) increased by 182 (4 main shale oil regions) wells during June. Looking at current well production levels and profiles for new US shale oil wells these 182 wells constitutes about 60 mb of producible oil within a three year time horizon. These must be considered as a type of oil inventory.

Since November last year when OPEC decided to cut the number of DUCs increased by 1188 wells to June (4 main regions). Again looking at current well and production profiles this equates to some 370 mb of producible oil over a three year period from these 1188 wells.

So OECD inventories are basically sideways from November last year to May this year with some 250 to 300 mb above normal. However, the three year producible inventory of US shale oil DUC’s has increased some 370 mb from November 2017 to June 2018. However, they are not sitting in the OECD inventories and are as such not felt directly in the crude oil spot market. They do however create a lot of surplus buffer inventory on top of the OECD inventories. This should help to keep oil prices in check and oil price volatility at bay over the nearest couple of years.

So while OPEC & Co in general and Saudi Arabia specifically are likely to be successful in drawing down inventories in H2-17 they may not be all that successful in total if we look at DUC’s + OECD in total.

Ch0: Managed money in WTI – some increase latest three weeks. More room to increase on the back of Saudi export cut 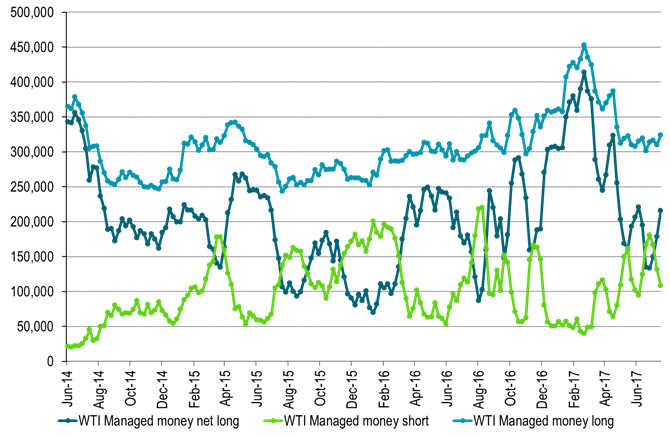 Table 1: US oil rigs down by 1 last week 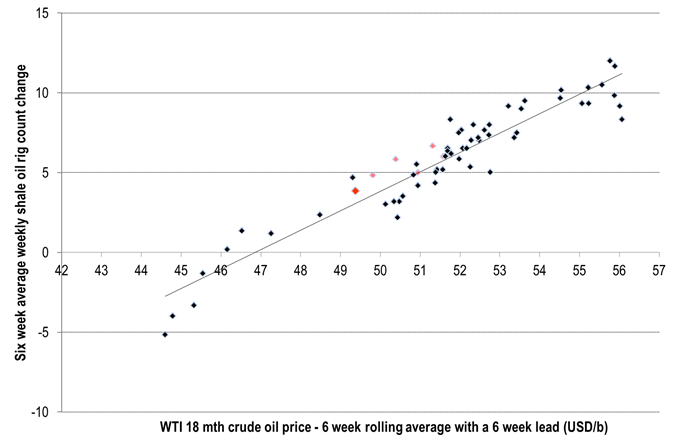 Ch2: Declining US WTI 18mth prices last six weeks calls for further slowing of rig additions next six weeks
However, WTI 18 mth price has still not yet moved to a level which will push rigs out of the market 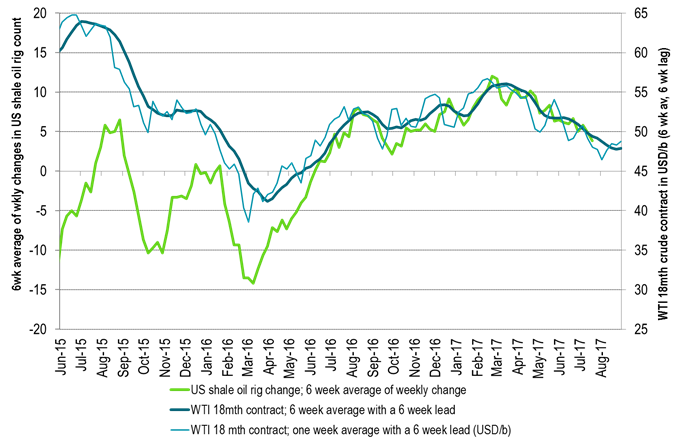 Ch3: Following a 3 week inventory rise in June, inventories have declined some 50 mb last 4 weeks
More to come in H2-17 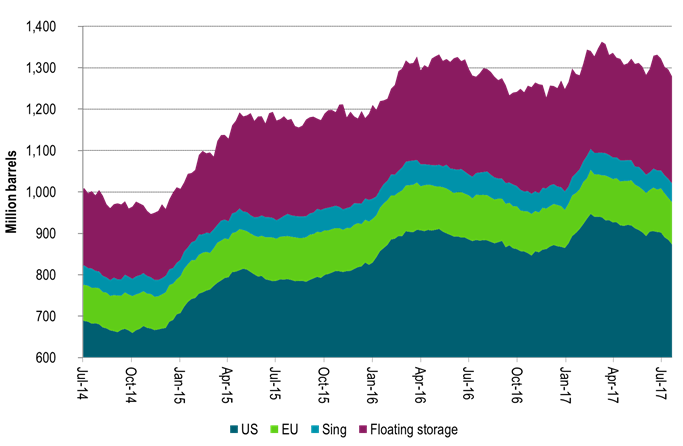 Ch4: US crude, gasoline and mid-distillate inventories down y/y for the first time since 2014 in last week’s data 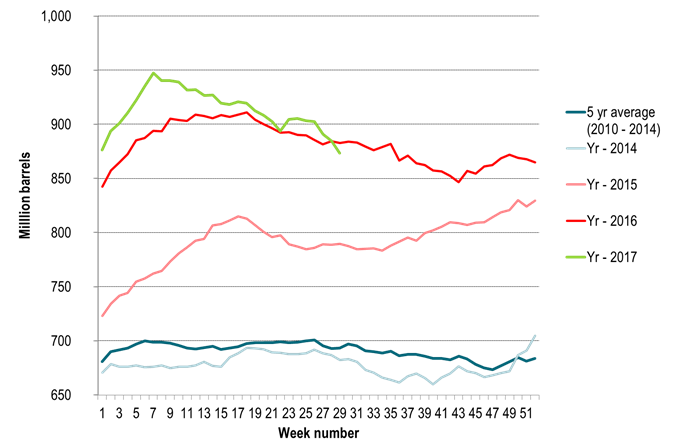 Ch5: US crude, gasoline and mid-distillate inventories down y/y for the first time since 2014 in last week’s data 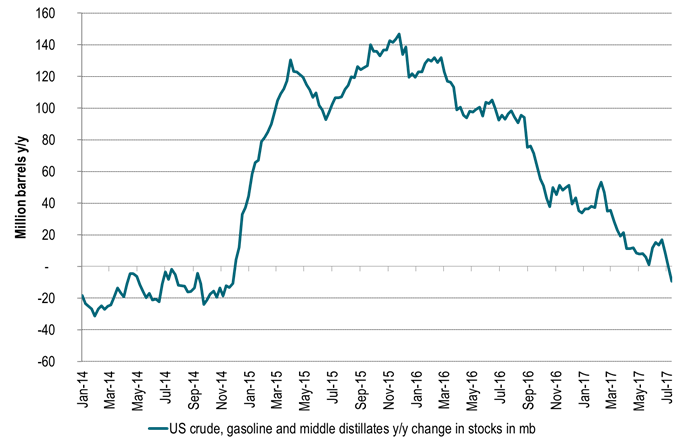 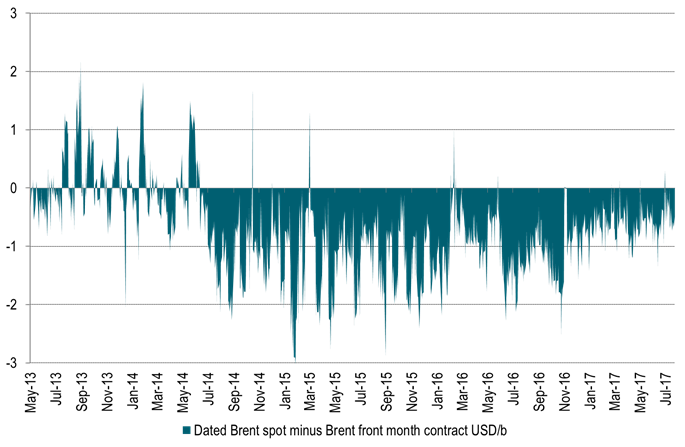 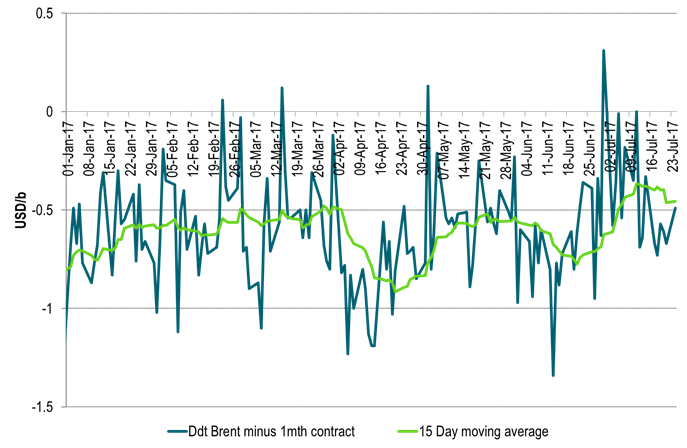 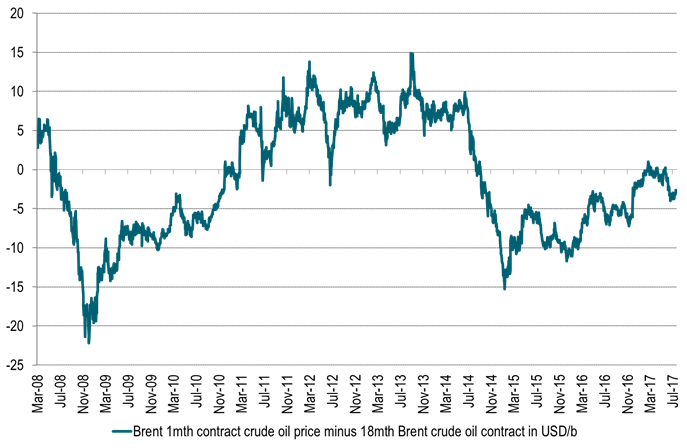 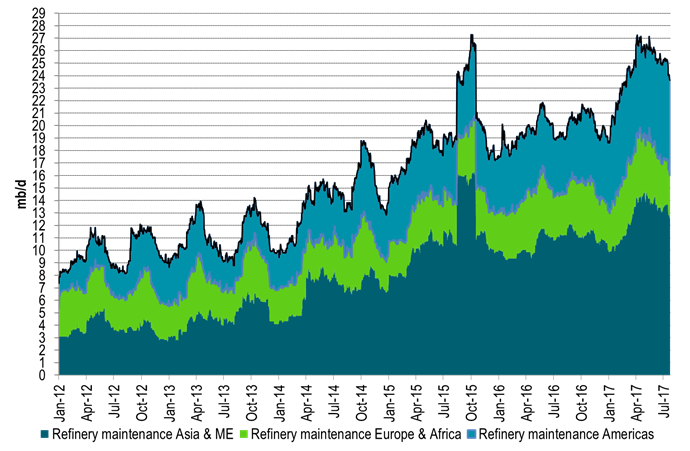 Ch10: Refinery margins which have been high during refinery maintenance risks falling back however 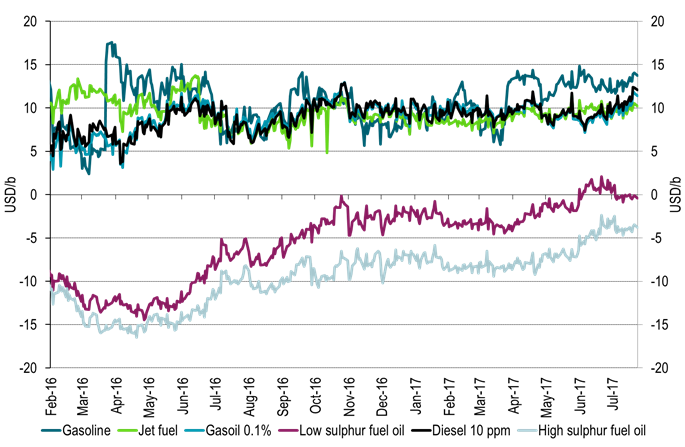 Ch11: Forward crude curves as of Friday and the Friday before. Lower w/w 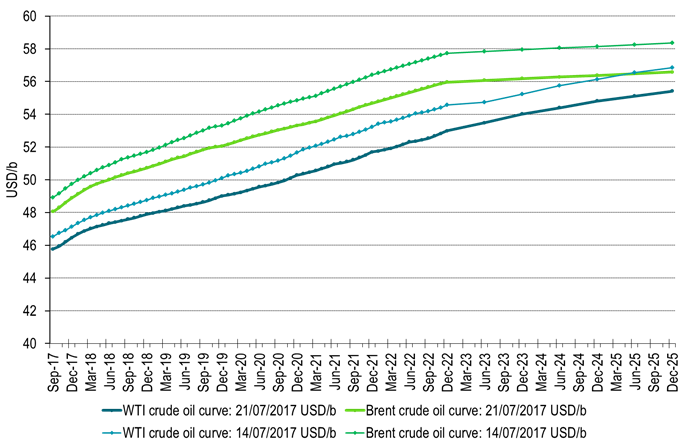