Donald’s tweet on Friday that the OPEC cartel is keeping oil prices artificially high sent Brent crude down to an intraday low of $72.88/bl. The market later in the day totally disregarded the tweet sending Brent to its highest close of the week at $74.06/bl, up $0.4/bl on the day, +2% w/w and the highest close since November 2014. Of course Donald is totally right. The market is artificially tight because the OPEC+ cartel has deliberately cut production. In total its production is down 1.7 m bl/d versus Oct 2016. In our view there were deliberate cuts of 2,052 k bl/d in February if we cut out involuntary cuts of 810 k bl/d and production gains of 1,146 k bl/d. Of course Donald is right that it is the OPEC+ cartel which is driving the market. Tell us something new! That has been the case since their decision in October 2016. Of course the cartel has been lucky since their strategy has been supported by synchronised global growth and very strong oil demand growth as well as production in Venezuela falling like a rock. If it had not been for the very strong global oil demand growth their strategy would probably have been very close to failure since US crude oil production is reviving so strongly. In our estimate they will not be able to exit their cuts in 2019 without driving global inventories back up again. That is why an extension of their agreement to 2019 is on the agenda for the meeting in Vienna on June 20/21/22. So the market is artificially tight but it is the oil market reality of today. They are cutting, oil demand is strong, inventories are going down and prices are moving higher. The OPEC+ cartel will in our view be in control of the market in 2019 unless we have a global recession. They can put some of their cuts back into the market, but not all. Any involuntary production cuts by Venezuela, Libya, Mexico or possibly Iran will of course be welcomed by the deliberate cutters in the group.

Since a 2017 high of 3059.7 in May 2017 the commercial OECD oil inventories have declined 218 million barrels which equals a 0.8 m bl/d daily draw down on average through the period. On average through that period the production of OPEC+ has been 1.4 m bl/d below its October 2016 production level in a mix of deliberate cuts, gains and involuntary cuts. Since the world is bigger than the OECD inventories there has probably been some inventory draws in non-OECD stocks as well. So while the OECD drawdown implied global deficit since May 2017 is 0.8 m bl/d the actual deficit may have been higher, but probably not higher than the net effective cuts of OPEC+ of 1.4 m bl/d over the same period. So yes, our view sides with Donald Trump that if it had not been for cuts by the OPEC+ cartel since January 2017 we would probably have had an oil price still somewhere around $50-55/b or even maybe sub-$50/bl.

There have however hardly been any negative responses to the OPEC+ cartel’s actions up until now on Friday with the tweet by Donald Trump. Not even Donald has acted before now even though production cuts have been going on since the start of 2017. Mostly the action by the cartel has been viewed positively across the board. I cannot remember to have seen any negative takes on it before now. Mostly the take has been that OPEC+ has been doing the world a favour.

OPEC+ has driven the global oil sector out of its investment hysteresis and out of its deep, dark abyss of despair and back into action

Through its cuts, inventory draws and higher prices OPEC+ has driven the global oil sector out of its investment hysteresis and out of its deep, dark abyss of despair and back into action. That is probably a good thing since it will help to reduce the risk for a significant undershoot in supply down the road due to the deep investment cuts in new conventional supply since 2014. And the jury is still out whether we will be able to dodge that bullet when the pipeline of legacy green field conventional oil investments from before 2014 starts to run dry in 2020. Our view is that there is clearly upside price risk due to this on this time horizon.

For the time being we remain bullish for Brent crude oil prices as OPEC+ cuts are intact, their agreement will and must be extended to 2019 at their June 20/21/22 in order to avoid raising inventories in 2019. For the rest of 2018 we expect inventories do draw lower with added supply risk due to Venezuela, Libya and possibly Iran.

If Donald wants to do something he can sign the sanction waivers on May 12 in order to safeguard Iranian crude oil supply. Else his dear voters and consumers are likely to face higher gasoline prices this summer. 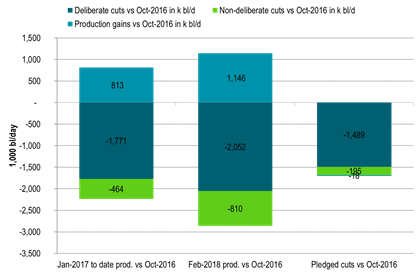 Ch2: OPEC+showing who are doing what versus October 2018 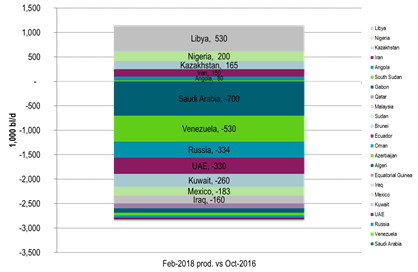 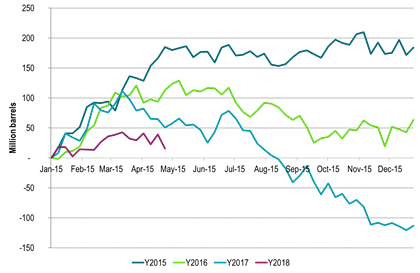 US oil fundamentals deteriorating much more than global

Getting to zero, getting the job done