Gold staged a recovery late in 2018. The yellow metal has recovered most of its losses since June 2018. A collapse in speculative positioning in gold futures drove prices down in the second half of the year, sentiment toward gold is clearly recovering in recent weeks. We expect the recovery to continue as many risks that were being ignored by the market start to get priced-in to gold. Our base case scenario is for gold to reach close to US$1370/oz by year end. 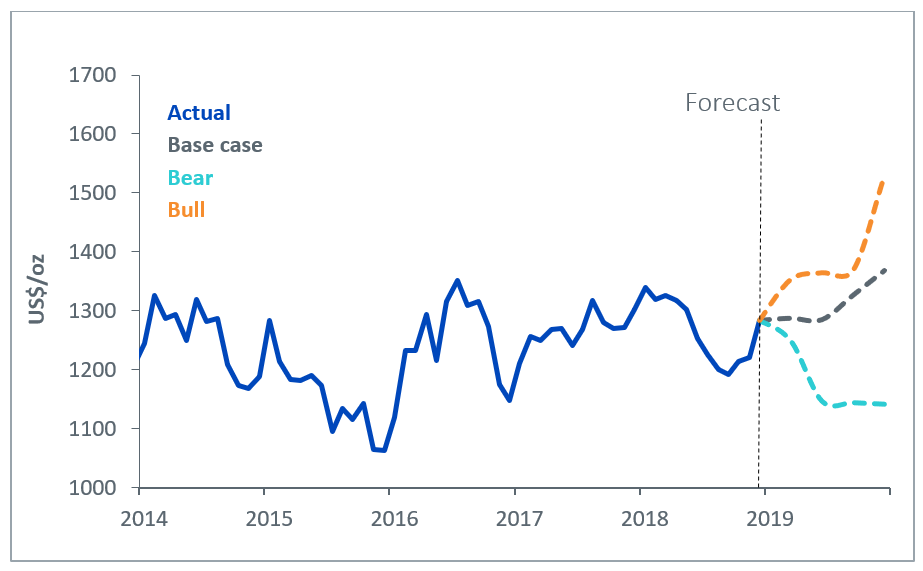 Using the framework we outlined in our paper Gold outlook: gold to flatline out to June 2019 in the absence of shocks, we apply our views on inflation, exchange rates, interest rates and investor sentiment to try to project where gold will be by the end of the year.

In 2018 speculative positioning fell to the lowest level since 2001 briefly before recovering very late in the year. Judging by flows into gold Exchange Traded Products, sentiment toward the metal is clearly recovering. Asset market volatility in the final weeks of the year was one of the main catalysts behind the recovery in gold positioning. The S&P 500 lost 14% and Brent oil fell by 35% in the final quarter of 2018. Moreover, the volatility of both benchmarks has risen substantially.

A government shutdown in the US acted as a jolt to investors to remind them that the world’s engine of growth (at least in recent times) is not invincible. Meanwhile concerns around China’s slowing growth rate also led investors to become less optimistic about cyclical assets.

We expect the Federal Reserve (Fed) to raise rates twice in 2019 (50 basis points), in line with the dot-plots in the central bank’s recent economic forecasts . That’s also in line with consensus forecasts by economists, however, Fed fund futures are not pricing in any rate increases for 2019. We side with the Fed’s guidance as we believe that economic data from the country is strong enough and labour markets are tight enough for the central bank to continue to raise rates. However, we acknowledge the risk to rates is on the downside – which in general should play to the upside for gold prices.

Although we expect a total of 50 basis points increase in policy rates by Q4 2019, we think that 10-year bond yields will only increase around 25 basis points to 3.0% in that time horizon. 2-year bond yields are likely to capture more of the gains in policy rates, but further out in the curve, we are likely to see less yield increases. That’s because the Fed’s holding of a large stock of bonds is likely to hold yields back from rising too aggressively. Also, recent tax cuts are likely to have the most impact in the very short term. As the growth impact peters out over longer horizons, the uplift to yields at the longer end of the curve will be less than at the short end. Although many people see yield curve inversion as a financial signal of impending economic downturn, we believe that an inversion can occur for the less benign reasons outlined above and so it is not necessarily a precursor to an economic recession. If anything, we believe the Fed will err on the side of dovishness, as it will be reluctant to drive policy too far from other central banks. In fact, Fed fund futures indicate that the market thinks that the Fed will stop raising rates altogether this year. That could prove to be supportive for gold prices over the course of 2019.

US Dollar appreciation to be short-lived

While the Fed remains the only major central bank raising interest rates over in the first half of the year, we expect the US Dollar to continue to appreciate, especially as judging by Fed fund futures, the market is currently not expecting further tightening. However, as other major central banks – the European Central Bank, Bank of Japan, Bank of England for example start to think about policy normalisation, we could see interest rate differentials narrow and the US Dollar weaken. Additionally, with growing indebtedness in the US – exacerbated by recent tax cuts – we expect a depreciation in the US Dollar.

Inflationary pressures to persist, but remain contained by Fed’s policy

US consumer price index (CPI) inflation peaked at 2.9% in July 2018 and declined to 2.2% in November 2018. Volatile energy prices were responsible for a large part of the rise and decline. We expect the Fed’s policy tightening to continue to keep demand-driven inflation in check, but a recovery in oil prices will likely place upward pressure on inflation at the headline level. We expect a small increase in inflation to 2.3% by year-end.

What will help sentiment toward gold improve?

Summarising the monetary/economic drivers of gold – small increases in interest rates, minor appreciation followed by depreciation of the US Dollar and inflation moving marginally higher – are not going to move the dial for gold in a big way. We believe that that gold prices will end the forecast period higher mainly as a result of sentiment towards gold continuing to move out of a depressed state. This process had started already in the final week of 2018 as most markets displayed excessive volatility. We have had multiple bouts of equity market volatility in 2018, but for most part developed world equities have snapped back. That does not guarantee resilience in the face of the next shock. We note that the last time speculative positioning in gold hit levels as low as they did in 2018 was in 2001 – the year when an Argentine debt crisis was brewing, and an overvalued technology sector was imploding. Gold reacted to the stress scenario but with latency. Gold prices rose 25% in 2002 (compared to 2% in 2001).

There are other risks, that could be supportive for gold as historically a safe haven asset, which could drive positioning in gold futures higher:

In our forecast, we bring back speculative positioning in gold futures to levels consistent with what we have seen in the past five years.

Combining the monetary, economic and sentiment driven factors affecting gold, we believe gold will reach close to US$1370/oz by the end of this year.

We have also developed alternative scenarios for gold as summarised below. Most of the sensitivity comes from our measure of sentiment, speculative positioning. But even in our bear case, we increase positioning into positive territory. In our bull case scenario, we assume the Fed will allow the economy to run hot, only raising rates once, which will put less pressure on bond yields to rise, aid US Dollar depreciation and keep inflation elevated at 2.9%. In the bear case, conversely, we assume the Fed acts more hawkishly and has more impact on the longer bond yields. The US Dollar appreciates as the Fed surprises the market with its hawkishness.

In our base case scenario, we expect gold prices to rise close to US$1370/oz by Q4 2019, mainly as a result of speculative positioning in the futures market being restored. Some US Dollar depreciation and small gains in inflation will also aid gold’s rise. 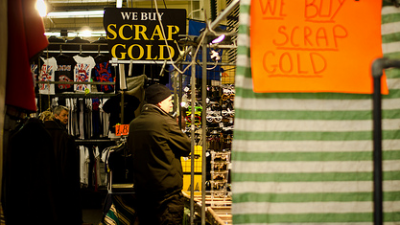 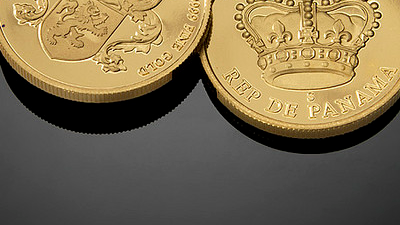