In terms of my oil view: Repeated lows during H1-16. Gradual recovery medium term. Price recovery likely to be gradual rather than stellar. I think the oil price is going to have a rough time during H1-16 with a strong rise in global oil inventories and that we are probably going to see new lows in prices ahead. Thus I don’t think that from here onwards it is happy days are here again with a strong rise in the oil price from here. I think it would be negative for the oil market balance if the oil price repeated what it did last year with a rapid rise from January low to above $60/b in May/June last year. This would not induce the neccessary adjustments needed to balance the market and would push the point in time when the market finally moves into balance further out in time. HOWEVER, I do believe that there is good risk/reward in buying Brent crude oil with delivery December 2016 at $35/b. It saw a low close of $33.9/b last week and currently trades at $37.5/b and thus not too far away. I think that the longer dated contracts should not trade much lower than what we have recently witnessed. I did expect the 2020 Brent crude oil price to traded down towards $50/b before it would stabilize after long, long decline from $100/b in mid-2014. The contract traded down to $45.9/b last week and now trades at $49/b. So I think the sell-off in the longer dated contracts probably should be fairly done by now. So what remains from here is probably some more contango, more discount for front end contracts versus longer dated contracts, due to strongly rising inventories. The main argument why the price recovery is likely to be gradual rather than stellar is: 1) No quick fix balancing of the market from OPEC as in the previous two oil price cycles. The oil price needs to do the job of balancing the market and that is a more length process than an OPEC quick fix. 2) Flexible shale oil supply which can ramp up rather quickly is likely to restrict the oil price from moving up too quickly during the period when the market needs to run a deficit in order to draw down current record oil inventories.

Crude oil comment – Strong rise in US oil inventories, but oil companies’ spending cuts accelerates
Brent crude gained 4.3% yesterday with a close of $31.8/b. Thus the rise in oil prices which started Thursday last week was not all dead after all after Monday’s 5.2% decline. Intraday high yesterday was $31.8/b and thus only $1.3/b below the 30 dma line. While we do not in general place too much emphasis on such measures they certainly have an important role in the volatile short term picture. This morning the 30 dma sits at $33.8/b and not very far avway from the Brent crude oil price this morning of $31.2/b. The 30 dma still has the potential to work as a magnet on the oil price in the short term picture. One of the bullish drivers yesterday was a statement by Iraqi’s oil minister saying that Russia and Saudi Arabia had become more flexible regarding possible production cuts. In our view there is no chance at all that we are going to see a production cut from OPEC this spring. Saudi Arabia’s strategy of not cutting and instead demanding that a balancing of the market shall happen outside of OPEC is still intact. At the moment we are seeing massive capex cuts outside of OPEC, thus the strategy is obviously working. It just takes some time. The latest signals from the US oil space is that Hess cuts its capital spending for 2016 by 40%, Continental by 66% and Noble by 50% for 2016 which will lead to reduced production by up to 10% y/y already in 2016 in the US shale oil space. Such a decline in US shale oil production is however probably already factore into most oil market balance projections for 2016. This morning the oil price falls back 1.9% to $31.2/b on the back of bearish indicative oil inventory data in the US last night. The API yesterday indicated that US oil inventories changed as follows last week:

The API thus saw in its partial data set reported by its members a much stronger rise than what was consensus in Bloomberg yesterday. Usually the API data are in the ball-park correct. So do expect a solid rise in US inventory data today at 16.30 CET. As we have stated before, if global inventories outside of the US are starting to struggle to store more oil, then a major part of the running global oil surplus needs to be stored in the US. Assuming a running surplus of 1.5 mbpd on average in H1-16 it would indicated that US oil inventories could rise by some 10 mb per week. Total US crude and product inventories have risen by 5.5 mb per week on average during the last 10 weeks, but has average 9.9 mb per week the last 4 weeks. During the first 10 weeks of the year US total oil inventories normally rise by some 1.1 mb per week and by 2.4 mb per week the first 5 weeks of the year.

US oil inventories. Marker in organge is if API indicative numbers last night is what comes out of US data today at 16.30 CET. 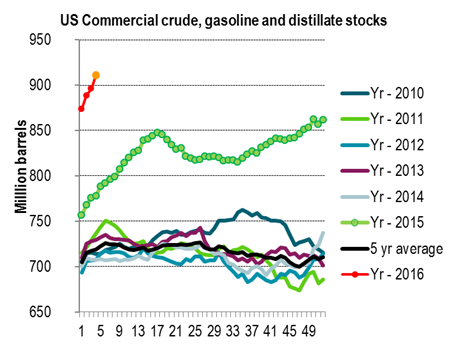