There is an intimate relationship between the oil price and the USD. Looking back at the crude oil price and the USD Index since 2013 they are mirror images of each other. We argue that it is not only a one way street from a weaker USD to a nominally higher crude oil price. There is also likely a link from a stronger crude oil price to a weaker USD as well. In addition we also have that OPEC & Co is forcing the oil price higher through their cuts while Donald Trump is promoting a softer USD amid a global economy which is reviving. We are currently in a Merry-go-round circle which is feeding on itself pushing crude prices higher, the USD lower which again is bullish for Emerging Markets which is bullish again for commodity demand,… If the circle is not stopped by verbal intervention from either OPEC & Co on the oil price or ECB on the Eurodollar side then this circle could spiral higher with Brent crude rising another 10% to $77/bl while the USD Index moves back to its 2014 level of 80 points. But both the dollar and crude prices are technically very stretch at the moment and ripe for corrections.

Yesterday the USD Index fell 1% while the Brent 1mth contract gained 0.8% to $70.53/bl. Brent crude thus actually fell 0.2% in real terms. The dollar was trading lower and lower all through the day. Brent crude also traded in bearish territory most of the day while it normally should have taken a bullish queue from the softer USD. The view that Brent has gone too far already probably weighted on the crude oil price. Brent was trying to move lower while the softening USD Index pulled stronger and stronger in the bullish direction.

Brent crude caved in to bullish push from the weaker dollar when the US inventory data came in at 16:30 CET. It showed that US crude stocks declined 1.1 m bl last week while the market had feared a gain of 4.8 m bl following the indicative numbers from API on Tuesday evening. Great relief. No decline. In addition the crude stocks in Cushing declined a full 3.2 m bl which gave a real boost to WTI crude prices relative to Brent crude. All in all for crude, gasoline and middle distillates there was a rise of 3.6 m bl which is not really all bullish. However, it was clearly bullish for WTI crude prices versus Brent and the whole mood just turned bullish. The Brent bears caved in to the bullish push from WTI and the strong bullish push from the weaker USD and up it went. This morning we have some follow-through as the USD Index declines another 0.2% while Brent trades 0.5% higher at $70.9/bl.

A pure 50% devaluation of the USD would obviously lead to a doubling of the nominal crude oil price. The dollar is just a unit of measure. If the yardstick shrinks by 50% then the amount measured will have to double.

In 2014 the US had a net petroleum import of 5 m bl/d and China imported of 6 m bl/d. Every dollar increase in the crude oil price results in a $4bn increase in the yearly expenditure of USD for China and US crude imports.

Most other countries than the US do not have this impact on the dollar cycle because they do not have dollar as their currency. When Europe for example purchases and imports crude oil it has to first buy the dollars in the global market place in exchange for euros. Then it spends the dollar for oil sending them to Russia and OPEC which then sends them back into the global market place when they spend it. Thus Europe’s oil imports are dollar neutral in terms of varying crude oil prices.

China is however a different case than most other countries. It has a dollar surplus to start with due to its trade surplus with the US. Normally this surplus of dollars are recirculated back into the US as China buys US treasuries, different bonds, equities or other US assets. A part of China’s dollar surplus is however spent on its crude oil imports and is thus fed to Russia or OPEC and then into the global market. China does not need to go into the market in the first place to purchase the dollar which it spends on crude oil imports. When the price of crude oil falls sharply then China will spend less of its surplus of dollar on crude oil and instead recirculate it back into the US by purchasing US assets. So a sharply lower oil price means China will feed a significantly lower amount of dollar into the global market place. Due to its dollar surplus and dollar recycling China is not dollar neutral in its crude oil import as Europe is.

The crude oil price has moved higher since early 2016 and sharply higher since June 2017. It has probably had an impact on the USD as it means a larger flow of dollar from the US and from China being fed into the global offshore dollar market via global oil producers like OPEC and Russia. It has relieved a dollar shortage among the world’s oil producers

At the moment there is thus likely a self-reinforcing cycle feeding a higher crude oil price and a softer USD. The USD is of course primed for weakness due to other reasons as well. That is also the case for Brent crude for which OPEC & Co has set the market up for tightness. So crude oil moves higher, the dollar moves lower which again implies a higher nominal crude price. The softer dollar is also EM bullish as it reduces their dollar payment burden of debt. So softer dollar leads to more bullish EM which again means stronger commodity demand and again a higher oil price. That’s a great Merry go round circle!

In the shorter term we are likely set for a correction in the dollar weakening. Verbal intervention from the ECB is probable. That would also likely be a trigger for a correction in Brent crude as it now has the most technically stretched level since 2011.

However, if there really is significant relationship going from the crude oil price to to dollar it means that the current crude oil price revival is now pointing us in the direction of a dollar Index level which we last saw back in 2014 which is another 10% lower at an index level of 80. A 10% softer USD also means a 10% nominally higher crude oil price. The current [oil to dollar] feeding cycle can thus go upwards/downwards to $77/bl for Brent crude oil and to 80 for the dollar index unless OPEC & Co stops the oil rally or the ECB stops the euro appreciation and the dollar weakening.

Chart 1: US dollar and oil – The mirror image 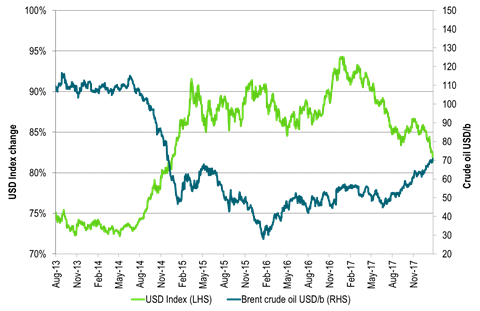 Chart 2: The market is tight as in 2013/14 shown by Brent spot versus Brent 1mth contract 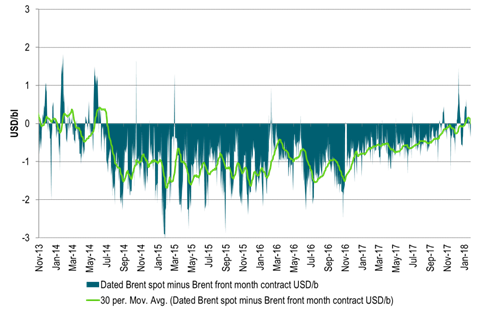 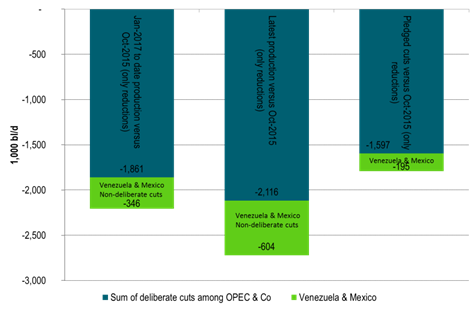 OPEC+ in comfortable position as U.S. shale oil slows down