OPEC yesterday decided to roll existing cuts over for another 9 months lasting all the way to March 2018. Maintaining production cuts also in Q1-18 was however communicated as a measure mainly to avoid driving inventories higher again in the demand wise seasonally weak first quarter of the year. To the surprise of many the market did not take the deal well and Brent crude oil fell $4.6% to a close of the day of $51.46/b with a low of the day of $51.03/b.

In hindsight we can now clearly say that there must have been a substantial amount of anticipation in the market for not only an extension of cuts but also for deeper cuts. Saudi Arabia’s communication to the market ahead of the meeting has clearly been misinterpreted when he stated that OPEC “will do whatever it takes” to draw inventories down to the 5 year average. The market view must have been that what OPEC & Co. did in H1-17 was far from enough. Thus “whatever it takes” should be MORE. Thus the moment Khalid Al-Falih said to reporters in Vienna yesterday at 10:20 CEST that “deeper cuts are not needed”, that was when the oil price started to fall. Long speculative positions which had run hard into the meeting and then instead ran for cover when the oil price started to tumble.

When OPEC launched the cuts last year they were dubbed as a “short term intervention”. Now it increasingly starts to look like a long haul structural battle. We do think that OPEC’s decision to cut will drive inventories down towards normal by the end of the year. Thus yesterday’s decision by OPEC & Co. is in our view making $60/b a sensible target for the front month Brent crude at the end of 2017. Thus as such we think that yesterday’s sell-off should be used as a buying opportunity. At the same time however it is likely leading to another 9 months during which a positive crude oil price signal leads US shale oil production to accelerate yet more.

US shale oil production has accelerated massively since November when OPEC & Co. decided to cut production. US crude oil production is now up more than 600 kb/d since the start of December 2016 which is more than the total 558 kb/d in pledged cuts from the 11 countries which have joined OPEC in cutting production at the moment. Their cuts are now basically wiped out. The US shale oil stimulus from the price gains following OPEC’s decision to cut in November has added some 250 shale oil rigs to the market. If we assume that there will not be a single additional US shale oil rig added to the market from July 2017 and all through to the end of 2018 we still expect that US crude oil production will grow by 0.5 mb/d y/y in 2017, 1.5 mb/d y/y in 2018 and by 1 mb/d y/y in 2019. However, as a consequence of the extension of the cuts all until March 2018 we are likely going to see a more supportive oil price and thus yet more US shale oil rigs being added to the market over the coming 9 months of cuts. In our view this is likely going to flip the global supply/demand balance for 2018 and 2019 into surplus.

Thus OPEC is increasingly painting itself into a corner. OPEC’s choice next year will be
1) Roll some cuts forward in both 2018 and 2019 (longer term structural battle) or
2) Put 1.8 mb/d of production cuts (OPEC & Co.) back into the market. Produce at will and let the price regulate the market yet again. I.e. the oil price needs to drop in order to push non-OPEC production lower in order to make room for OPEC & Co’s production revival.

It is often said that generals always fight the previous war meaning that they use tactics and strategy from the last war because that is what they know even if these are outdated. In a way this is what OPEC & Co are doing. In a shale oil world they should have med the cuts quick and dirty. It should definitely have been a short term intervention and not a long term structural battle. In the old days when non-OPEC production solely consisted of conventional oil production with a lead time from investments to production of some 5 years then gradual, enduring cuts did work. Now however keeping cuts going just leaves US shale oil producers all the time in the world to respond and revive. Rather than OPEC & Co cutting 1.8 mb/d for a full 5 quarters (2017 + Q1-18) they should rather have cut production by 3 mb/d for one quarter. That would have left little time for US shale oil players to ramp up investments and thus have limited the cumulative production impact on 2018 and 2019.

At yesterday’s meeting they should have decided massive cuts in Q3-17 and then no more. That would have been the right medicine for the market. Draw down the inventories in a flash. No lengthy time for US shale oil producers to revive and voila, inventories down to normal. A flat or backwardated crude oil forward curve where the mid-term WTI forward curve could be kept in check from there onwards.

It is still not too late for Saudi Arabia to follow this kind of strategy. They have basically promised what they are going to produce over the next 9 months. They could possibly do all of it in Q3-17. Rather than placing production at 10.06 mb/d for 9 months (a cut of 486 kb/d) they could instead produce 9.07 mb/d for the three months in Q3-17 which would mean a cut of 1.458 kb/d versus its October 2017 level. That would have drawn the inventories down by an additional 90 mb in Q3-17. At the same time Saudi Arabia should sell a comparable amount of volumes on a forward basis 2018 and 2019. This would help to prevent the medium term forward curve from rising. Thus again limiting the price signals and hedging opportunities for US shale oil producers.

Khalid Al-Falih has said that US shale oil producers are not the enemy. He welcomes their production revival. However, it still needs to be managed in the right way. At least as long as OPEC & Co is trying to manage the market. And the right way in our view is quick and dirty cuts. Do it all in one go rather than extended and do manage the price level of the mid-term forward crude oil prices.

JPM this morning cut its 2018 Brent crude oil price outlook to $45/b. That is great news for OPEC & Co because it will help to hold price expectations low for 2018 and 2019 and thus help to keep the mid-term forward crude prices in check and thus help to limit the positive price signals to US shale oil producers and thus limit further strong additions and activations of rigs.

As of now however the picture is for a lengthy nine months of additional production cuts and thus more US shale oil rigs being activated driving both 2018 and 2019 into surplus. As such there is increasing concern in the market for the exit from cuts. It is easy to take 1.8 mb/d off the market (1.2 mb/d for OPEC and 0.6 for Co.). With further revival of US shale oil it will be increasingly difficult to put the volumes back into the market again. An exit strategy was not discussed at the OPEC meeting. “We will cross that bridge when we get there” was Khalid Al-Falih’s comment. The market is worried however that come April 2018 then OPEC & Co moves back to “produce at will”. If that was the case following 5 quarters of US shale oil stimulating production cuts from OPEC & Co that would mean that the front month Brent crude oil price probably would have to move down to $35/b in order to slow down US shale oil production again.

With increasingly a surplus becoming the likely outlook for 2018 and 2019 (due to nine more months of cuts) the price outlook for these years increasingly becomes tied to OPEC & Co’s strategy of rolling cuts yet further down the road or not.

We are however increasingly concerned about the oil market balance and thus oil prices in 2018 and 2019. The fact that Algeria’s Energy Minister, Noureddine Bouterfa, was replaced in a minister re-shuffle yesterday is concerning. He was at the heart of last year’s negotiations. He was the oil diplomat which criss-crossed between OPEC and non-OPEC members to make the production cut deal last year happen. Thus losing him as oil minister is probably not a good thing with respect to further cuts beyond March 2018.

This is what OPEC hopes for: 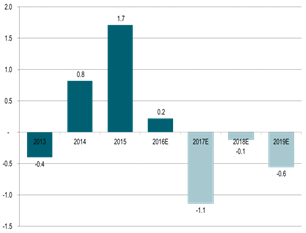 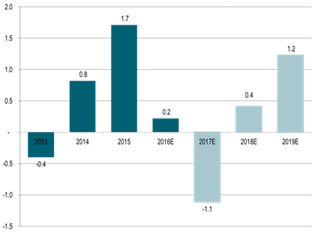