Price action – Oil prices contaiged by broad based risk-off in financial markets
The sell-off in oil prices yesterday was basically risk-off in markets in general contagien the oil market where net long money had piled up six weeks in a row just shy of the Feb high long spec. Speculative money were taken off the table yesterday on broad based risk-off contagion and oil prices along the crude forward curve fell as a result. Little oil specific about it. Today oil prices are down 0.8% with Brent at $51.5/b with a little more sell-off following the IEA report but most of the sell-off came before the report.

**Why the IEA report is a confusing report**
Demand level in 15 and 16 is water under the bridge. We know we don’t know what it was and we know that the IEA don’t know either.
What we do know is that OECD inventories went sideways in H1-16 and then downwards in H2-16.
With its latest numbers (“IEA’s spread sheet exercise”) the IEA now calculates a 2016 surplus of +0.9 mb/d for 2017. But where is that surplus?!!! OECD inventories went DOWN in 2016!!
A 0.9 mb/d surplus in 2016 would mean that inventories actually should have increased somewhere by 329 mb. We don’t know where.

The proof of the pudding (inventories declined) is that 2016 was in balance to deficit. It was not a surplus of 0.9 mb/d. That surplus number is purely a spread sheet exercise number with no match to inventories.

Further we see that inventories are drawing down solidly counter seasonally in Q2-17 and further in July.

The positive take which matters from IEA August report is that:

1) Demand growth for 2017 is stronger than expected and revised higher. (More to come in our view. I.e. we expect 2017 demand growth to be revised yet higher further down the road)
2) Inventories are drawing down solidly (counter cyclically) in Q2-17 and continue to do so in July

Price action in the market is a Brent crude forward curve in backwardation at the front end of the forward curve reflecting that inventories are drawing down.
That the inventory draws are artificially managed by OPEC+ in 2017 is of course another matter and another story.
That 2018 poses a lot of challenges for the oil market with still strong non-OPEC production growth and thus need for OPEC+ management of the oil market balance is also another story.
What is striking is that there is a big mismatch between IEA’s oil market balance for 2016 and what we saw of inventory draws rather than a 329 mb inventory rise implied by a calculated 0.9 mb/d surplus.
Thus their “reset” of oil demand levels for 2017 and 2018 (on the back of 2015 and 2016 revisions) must be off the mark as well. 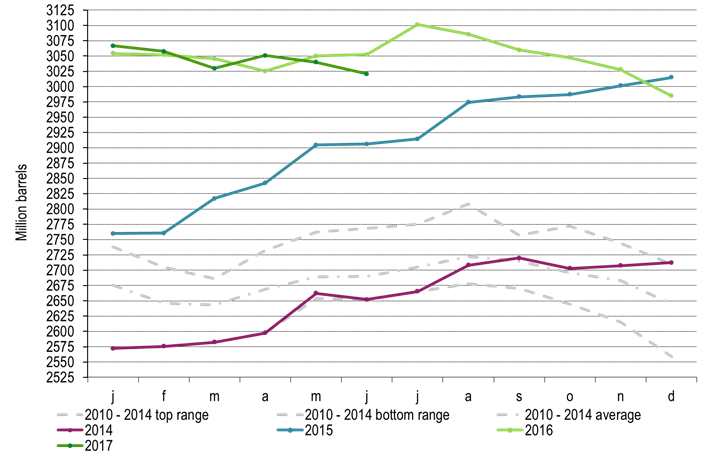 Ch2: US crude, gasoline and disstillates inventories – The strong draw down continues 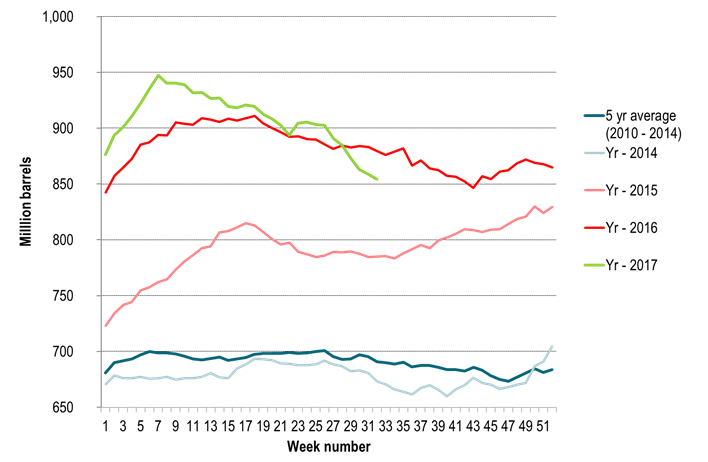 QT is good for OPEC