Headlines this morning gives the impression that all are now on-board for extending the cuts to the end of 2018. Reading in more detail however shows that it is not at all yet a done deal. And in addition it does not say whether the cuts will be maintained at current level all to the end of 2018. Specifically it seems like there is going to be an option to review and revise strategy at the next meeting in June. I.e. “maintain cuts if needed, but only if needed”. Russian producers are deeply concerned about the end-game. How to wind down the cuts without risking to crash the oil price. As such a sensible outcome in our eyes would be to wind down the cuts gradually through seasonal demand strength in H2-18. The cutters probably do not want to surprise the market positively risking firing up the oil price yet more at the same time as Rystad Energy is calling US crude oil production to hit 9.9 mb/d end of 2017 while also the US oil rig count has started to rise.

We have seen great reluctance from the Russian side in the run-up to this meeting and decision. Key has been the ”independent” oil companies in Russia who are getting ready dispatch new green field projects in 2018 in addition to what they have been holding back this year. These companies are getting very eager to get these new projects into production as well as the side lined once.

These companies fear that unconditional promises of cuts to the end of 2018 will fire up the oil market yet more with yet more stimulus of US shale oil production thus making it difficult for them to get back into the market at the start of 2019 without risking crashing the oil price then.

Thus exit of cuts has come into focus and has been a key point for Russian oil companies and thus the Russian delegation in Vienna.

I do not expect to see an unconditional extension of cuts to end of 2018 coming out of today’s meeting. A sensible outcome would be to keep current production cap through H1-18 and then ramp down the cuts through H2-18 during seasonally high demand in H2-18. And finally to have a touchdown in November 2018 assessing whether there is a need to trim production during seasonal weakness in H1-19.

This kind of outcome is probably less than what the market is hoping for and pricing in. Such an outcome would thus likely lead to some sell-off in the crude oil market.

Nonetheless in terms of appearance of price action ahead of the meeting the market seems extremely relaxed in terms of interpreting oil price action in the run-up to the meeting. I think the market is correctly assessing that OPEC/Non-OPEC is highly unlikely to throw away all what they have achieved over the past year (inventory draw down and a major shift from contango to backwardation, from spot price discount to spot price premium versus longer dated prices). However, it is probably wrong in assuming a full Christmas present with unconditional cuts to end of 2018.

Speculative net long crude oil positions in the market are currently at the second highest level in history. The fairly muted price action ahead of this meeting may thus be completely misguided in terms of possible price reaction to the outcome of this meeting in case the market is significantly disappointed by the outcome.

My expectation in terms of outcome of the meeting is thus that cuts are maintained during H1-18 and then gradually ramped down in H2-18 with a possible trimming during seasonal weakness in H1-19 if needed.

The message will be clear that they are NOT shifting from current strategy of “Price over volume” and back again to “Volume over price”. However, they are neither willing to drive the Brent crude oil price to the sky risking further strong acceleration of US shale oil production at the same time as OPEC/Non-OPEC cutters are holding back production. Yesterday’s news that US crude oil production is likely going to reach 9.9 mb/d by end of 2017 according to Rystad Energy’s estimates is a very clear message that OPEC/Non-OPEC cutters needs to tread carefully both when it comes to actual further cut extensions as well as how it communicates its plans and ambitions in terms of prices and goals.

As such the group should not really want to surprise the market positively today.
Rather it should want to give reassurance and confidence.
The perfect outcome for the group today would be if the oil price does not move at all.

Ch1: “I want $69.63/b!”
Brent crude oil 1mth contract in USD/bl
But the market has gone in a one way street upwards since June.
Will we get there this time around or will we need a round of speculative re-set before heading for the $69.63/bl at a later stage? 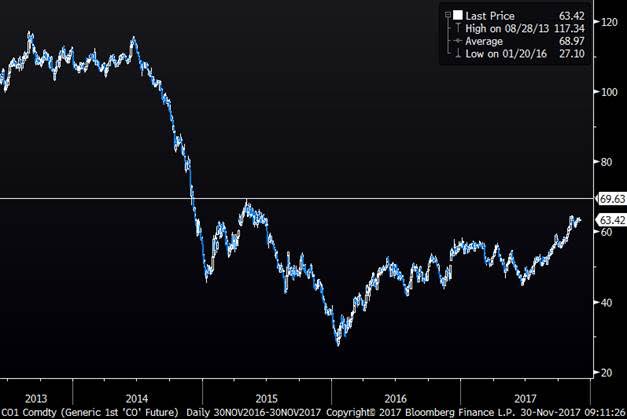 Ch3: And speculators have positioned themselves accordingly. A sell-off ahead in the making?
Riding the upwards trend since June has been a good thing adding more and more length on the way upwards 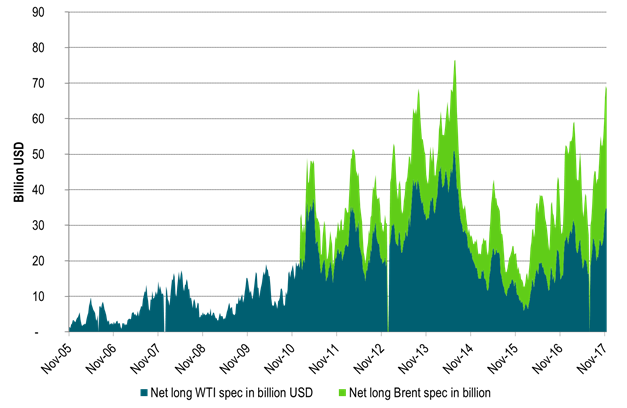 Ch4: Record high net long spec position (Brent + WTI) when counting contracts and barrels
Almost doubling since June!
There will be a reset at one point. Maybe today or maybe later 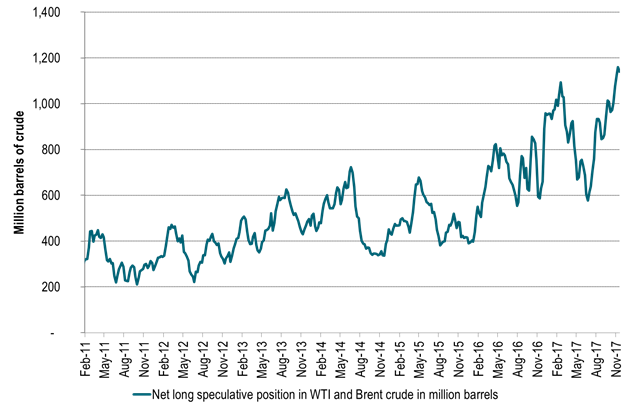 Ch5: Brent Dated crude oil price has started to weaken versus the Brent 1mth price signalling weakness in the physical Brent crude oil market
Should be trading on par if market is tight 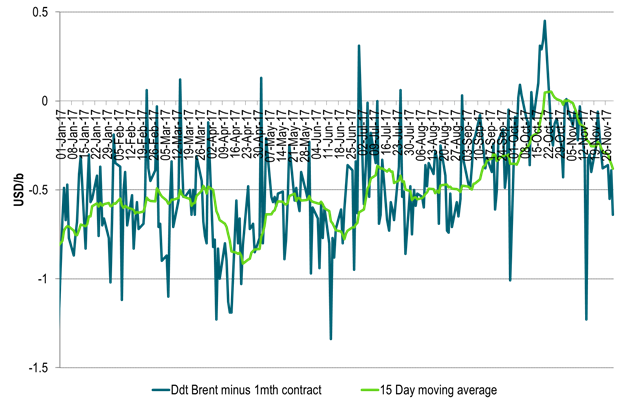